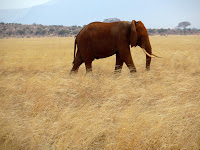 Despite the first post (yesterday) referencing the FOGs/FOAs safari, I realize now that I didn’t give any “preview” for what the later posts might include.

I wrote that one of the purposes of the safari was not only to experience the Great Migration with my friends, but to also share with them Mr. Guy’s great infatuation for the African elephant. So it seems appropriate to send along a link to some of the photos, a “preview” you might say, to what I hope to share on this blog. If you would like to see the photographs, go to 2013 Preliminary Safari Photos here.

And my friends seem to agree that infatuation is probably the best word to describe my enthusiasm for these magnificent creatures. Indeed, at the birthday luncheon, this excerpt from Karen Blixen’s Out of Africa was shared, and I came away with a new nickname.

In this section of the book (1937), Blixen writes about the value of the
opinions of white visitors/expatriates, the value that is found, as she
put it, by the Natives “in their mythological or theological
mentality”:

…. The Europeans have lost the
faculty for building up myths or dogma, and for what we want of these we
are dependent upon the supplies of our past. But the mind of the
African moves naturally and easily upon such deep and shadowy paths. This
gift of theirs comes out strongly in their relations with white people.
You find it already in the names
which they deal out to the Europeans with whom they come in contact,
after a very short acquaintance. You have got to know these names if you
are to send a runner with letters to a friend, or find the way in a car
to his house, for the Native world knows him by no other names.
…
And there is magic
in words: a person who has for many years been known by the name of an
animal in the end comes to feel familiar with and related to the animal,
he recognizes himself in it. When he is back in Europe [back in
America?] it is strange to him to feel that no one ever connects him
with it. 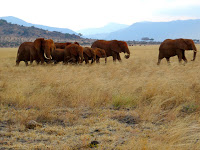 Once, in the London Zoo, I saw again an old retired Government Official, whom in Africa I had known as Bwâna Tembu
– Mr. Elephant. He was standing, all by  himself, before the
Elephant-House, sunk in deep contemplation of the Elephants. Perhaps he
would go there often. His Native servants would have thought it in the
order of things that he should be there, but probably no one in all
London, except I who was there only for a few days, would have quite
understood him.

So perhaps I am beginning to think of myself as Bwâna Tembu, as my friends seem to be doing. However, as one Kenyan friend pointed out, Blixen’s spelling appears to be incorrect, since tembu is the Ki-Swahili word for “beer.” The word for elephant is tembo (confirmed in the online English/Swahili dictionary). Even though I would like to have my new nickname spelled as Karen Blixen spelt it, Blixen seems to have been mistaken. Or – more likely – perhaps that’s how the word was spelled in 1937 by expatriates living in Nairobi.

Please join me in enjoying the 2013 Preliminary Safari Photos.