Yes, I know I’m going a little overboard with so much content about Ostia Antica, but I don’t want to forget any of my favorite experiences in this wonderful historical place.

And who would have expected elephants in this ancient site?

But before I get to my elephants, let me apologize for a bad link.

If you enjoyed the first of the Ostia Antica posts (Rome’s Ostia Antica—For Travelers Who Like to Stray from the Typical Track) and the post about the museum (Ostia Antica (2)—The Surprising Museo Ostiense), I hope you’ll enjoy this. 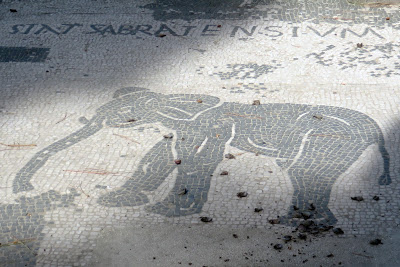 Wrapping up my Ostia Antica adventure, I’m delighted to share one more little treasure found at that splendid place, the mosaics of the elephants. And, yes, it’s true I seem to go a little overboard about elephants—even elephants from ancient days—but I hope you’ll bear with me for yet another story of one more of Guy’s adventures with elephants. (I can’t seem to stop, can I?)

Actually, I suppose it’s a pretty harmless interest, and certainly seeing the elephants in the wild in Africa is a thrilling adventure indeed. For me, it’s also intriguing to think about how long elephants have been capturing the attention of explorers and adventurers, centuries even. I remember visiting Villa Romana del Casale in Sicily and being very impressed with what I saw (and with the extremely knowledgeable archaeologist guide who took us through the site, even kneeling down to wash away some of the dust from some of the mosaics, so we could view the colors better and take joy in how brilliant they are, even after all this time).

There’s a very informative article telling the story of what’s happening at Villa Romana del Casale that’s worth reading. It appeared in The Telegraph (Sicily: A Miracle at Villa del Casale). We had visited this remarkable site back in 2009, three years before the article in The Telegraph, and it makes me very happy to see that work is progressing there. Even though there is much still to be done, one of the great treasures of Villa del Castale is the very well preserved mosaic floor. It’s just loaded with mosaics, including images of people as well as depictions of all the wild animals the Roman nobleman had brought back to him, after commissioning hunters and ship captains to capture and have these animals in his own private zoo. A massive array of photographs of the mosaics at Villa Romana del Casale can be viewed here but, alas, there’s no photo of the elephants at that site.

So there’s obviously a long tradition of having mosaics of the wild elephants, and everyone knows elephants live a long time. How about elephants that are still around after 2,000 years?

OK. Perhaps not the animals themselves, but who wouldn’t be impressed when finding himself viewing mosaics that were put down in Ostia Antica.

These are located on the floor of the Piazzale delle Corporazioni (Square of the Guilds) which I’ve already described. This area was sort of a city center or governance area, and because Ostia Antica was the center so much shipping—both for bringing goods into Rome and taking Roman goods away—it makes sense that the shipbuilders and shipping companies (or whatever organizations managed the shipping) would decorate the floors of the square with mosaics with images of what was seen in the lands they visited.

Of course these two amateur photographs don’t add much to the story, and as photographs don’t begin to match the “travelogue” photographs in guidebooks and newspaper accounts of ancient mosaics, but they are fun to view. As I noted earlier, I was there almost to closing time, and I didn’t get to the mosaic floors of the Piazzale delle Corporazioni until it was nearly evening, and the light was beginning to fade. So I had to do a little dancing about to capture these photos of my beloved ancient elephants. Nevertheless I had fun taking the photos (pine cone detritus and all—I didn’t dare climb over the barrier and walk on the mosaics to clear away the pine cones, and I had to deal with the falling shadows as well). So the photos aren’t great they’re good enough to give me a nice reminder of my favorite part of Ostia Antica.