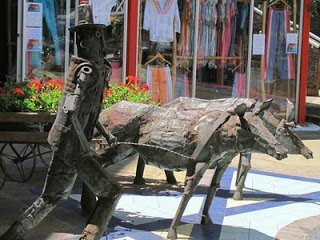 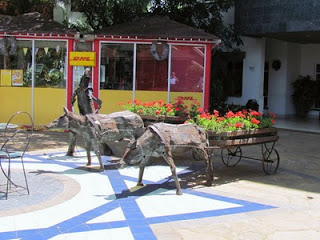 I commented a little about Village Market the other day, and had planned to
follow up with some description and a few photos, but….As it happened, I did get to take a couple of photographs, but that was
before I was seen by one of the guards. He very politely told me that
photography isn’t permitted – some sort of security issue, it seems (and of
course security is always an issue – the place has both armed and unarmed
guards all about – one Saturday I walked about counting them and found eight
with their rifles and 12 uniformed guards just walking about, a police
presence, I suppose. So I can understand the prohibition of photographs at, say, the American
Embassy or the U.N. (across the street from one another). After all, it’s
all part of the times we live in, right? But a shopping center? Give me a
break….Oh, well. As I said, the guard couldn’t have been nicer about it, so I went on with my
shopping and just gave up on getting some photos, a little disappointed
because Village Market is an interesting and very different kind of shopping
“centre” than we are accustomed to in the States. It’s walled on most sides,
with plenty of parking inside around the inside perimeter (which I don’t
think about, ’cause I just walk in and out since I love just near-by), and
all the stores are arranged in a sort of hodge-podge layout. You can easily
get lost, but the center of the place is easy to find your way back to,
because it is an outdoor eating area surrounded by very nice restaurants. I
like to eat there when I can, simply because it’s so pleasant to sit in the
open courtyard, watch the people, and enjoy the splendid Nairobi weather.Village Market is on several levels, with lots of water flowing down over
the stones, and nice staircases to lead you up and down. On one of the upper
levels, just in front of my dry cleaners, is one of the neatest pieces of
sculpture I’ve ever seen. In fact it’s part of a group of statues, about
five or six I suppose, scattered about in Village Market. They all seem to
be made of leftover metal parts, mostly humanoid-type figures, but up on
this level there are these delicious porcine-like animals pulling the
cartload of flowers. And the driver, herder, whatever you want to call him –
well, he’s pretty typical of the statuary of the place. Neat.