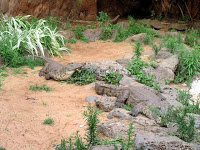 Yes, you read that right. In Nairobi – right in the city – there’s a place called “The Crocodile Farm” and all I can say is that I’m happy I don’t live in that neighborhood. Of course it’s not dangerous and the area is well controlled but it’s not a place I would particularly want to be near. I seem to have this attitude about crocodiles, probably dating back to a first safari a long time ago in Kruger National Park, in South Africa. Even though we were far away – as we were when we viewed the crocodiles on the migration safari in September in Kenya – I just don’t want to be anywhere near crocodiles.

The place is officially known as Nairobi Mamba Village and it’s not exactly in the heart of Nairobi, so I should not have worried. But it is in the rather up-scale suburb of Karen, and it’s laid out around a man-made lake with beautiful gardens. I don’t think it’s a government or local authority place, as it seems to be more of a private operation and, sadly, seems to be a little run-down. There are several buildings that are not open and in obvious disrepair, and even though there is a playground with rides and such (and a reticulated giraffe and quite a few ostriches, which visitors can feed from their hands) and a very nice restaurant, you get the feeling that the place has seen better days. There’s even a nightclub attached, built up over the place where the 60-some Nile crocodiles are kept and fed (gory thought, that) and while the mamba (the Swahili word for crocodile) are all fenced in, it’s a strange sort of attraction. The crocodiles are mostly docile during the day, but at feeding time when chunks of what smelled to me like very rancid meat (I had to leave the area) are tossed to them by the attendants they become extremely active. It was all pretty unpleasant, as far as I was concerned.

Nerisa, brave soul that she is, took the photos and she did a great job. I will enjoy remembering my visit to the Crocodile Farm from looking at her good pictures. That’s close enough for me.