With a new camera and off on a business trip to one of America’s most beautiful places, I had a good time in San Diego last week.

Before I get too far away from the trip I want to note a couple of monuments I’ve observed on previous visits, both of which I got to see again this time. It makes me very happy to share these with friends and colleagues. 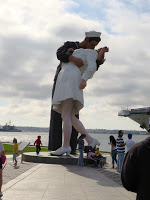 San Diego – long an important center for U.S. Navy operations – is the site of the museum build around the U.S.S. Midway, and there’s no denying that it’s an important ship for a visit (particularly when you’ve had a little bit of American history and you understand the role the Midway played over the years). It’s an amazing space, this ship, and when you stop to think that more than 225,000 sailors have been assigned to the ship, walking its decks is an awesome experience. Commissioned just after the end of World War II, the U.S. Midway was for many years the largest ship in the world.

In the shadow of the Midway are the two monuments I refer to in the title, a huge statue based on one of the most famous photographs of the war, taken during the victory celebration in New York’s Times Square. The iconic photograph, turned into a massive sculpture for San Diego, honors all the nation’s servicemen and makes it clear that they had every right to be celebratory when they came home.

A second monument honors longtime comedian and star Bob Hope (1903-2003), who spent much of this career supporting the nation’s troops and traveling wherever he needed to go to entertain the country’s service personnel. This sculpture depicts one such occasion, with an appreciative audience made up of members from all branches of the United States armed forces.

So a quick immediate impression of San Diego begins right next to the U.S.S. Midway and very naturally sets up a happy and wholesome mood for enjoying the beautiful city. Go here to see a few of my photos of the monuments.