A few more comments about my nice excursion into Central Park last Friday, my afternoon full of walking, enjoying the spring flowers and happy to be having a break from the usual busy schedule. Just wandering about, with no particular goals in mind. Just strolling on toward downtown, toward my own neighborhood. 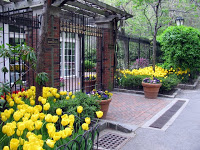 About halfway down the park, after I tired of looking at the scenery, I stopped at the Boathouse for a coffee and spent a terrific hour continuing with David Brooks’ The Social Animal: The Hidden Sources of Love, Character, and Achievement. [Isn’t the iPad 2 great? I like the Kindle app on the iPad 2 better than the Kindle!] Terrific book, and a super way to while away some time in a beautiful setting.

Then on with the walk, all around to Bethesda Fountain, a popular gathering place for all sorts of New Yorkers. And why not, on such a day? According to some, Bethesda Terrace (of which the fountain is merely the central element) is the “defining feature” of Central Park, but I might argue with that.

I would not argue the beauty of the spot, though. Designed by English-born architect and designer Jacob Wrey Mould, a close collaborator of Calvert Vaux, Bethesda Terrace is best known for all the carvings throughout the design. I failed to do justice to them with my photographs last Friday (so watch for an update in the not-too-distant future – I’ll take another day just to capture the carvings at the Bethesda Terrace) In the meantime we can delight in The Angel of the Waters Fountain (also known simply as “The Bethesda Fountain” of course), dedicated in 1873, the work of Emma Stebbins, the first woman sculptor commissioned by the City of New York to create a major work. 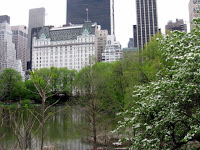 My Friday walk continued on down The Mall, intentionally designed to be the only straight line in the park (that tells us a little about what Olmsted and Vaux had in mind, doesn’t it?). At the end of The Mall, at a section sometimes called “Literary Walk” – I presume because of the literary figures whose statues are there) – I had fun surveying some of the statues and thinking about what life must have been like when they were erected in the 1870s and 1880s. Then another few minutes resting, looking across the end of the park at our beloved Plaza Hotel, still a great monument to an earlier, more graceful time in New York’s history.

A few photos commemorating my walk are at More Central Park Springtime Photos.