Before I get into describing my impressions of Kenya and what we experienced there during July, I’m finding it of interest that we’re seeing recent news and stories from that beautiful place. Having just returned from our great safari in Kenya, my traveling friends and I are surprised to find so much to read about Kenya. Especially in August (when the overall news cycle is pretty slim), it seems unusual to have so many stories – other than our own, of course! – to attract our attention.

First of all, we were sadly disappointed for all the travelers in and out of Kenya, here at the high season of the Great Migration, when we learned of the awful fire at the Jomo Kenyatta International Airport last Wednesday. While most of us traveling in and out of Kenya don’t spend much time at the airport (except for bureaucratic reasons, and even those situations seem to be getting better with each visit), the airport is an essential passenger and cargo hub for East Africa. I’m happy to learn that operations are getting somewhat back to normal, thanks to quick action on the part of airport officials and the Kenyan government. And specially happy to learn that the fire is generally understood to have been an accident, particularly as it came on the 15th anniversary of the bombings of the American Embassies in Kenya and Tanzania, which killed more than 200 people. That’s a major relief for those of us who love Kenya and have friends there. 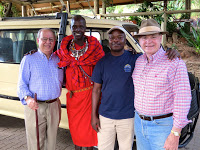 More directly connected with our safari is Michael Benanav’s Through the Eyes of the Maasai, a long description of Benanav’s stay with the famous Maasai community (published in The New York Times Travel Section on August 9). I explored the historical riches of the Maasai when I lived in Kenya, and we were lucky on our recent safari to meet up again with Thomas, our Maasai friend who had been our guide and companion on two prior journeys. Thanks to the good detective work of our driver and good friend Charles Masese, we were able to connect with Thomas when we were in the Masai Mara National Reserve (also spelled Maasai Mara, as Benanav notes). Here, in one of the photos from the trip, is Andrew Berner, Thomas, Charles, and Guy.

Thomas took some of our group into his own manyatta. The term manyatta seems to have several meanings, depending on who is involved in the conversation. For some reason I earlier had the impression that the term referred to a village in which there were several houses and a large central area where the cattle are brought in every night (for security, especially from lions, the entire village is round in shape and surrounded by thorny bushes, with a single opening that is enclosed with more bushes at night). It’s true that there can be several houses in the village, but the term seems to be a little more family connected, you might say, in that the entire collection of houses are related to one family, so in that sense manyatta can mean something like one’s “home” or “where one lives.” 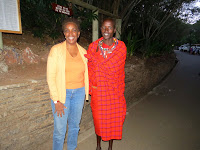 This trip I did not visit Thomas’s manyatta, but two of our traveling companions, Sandra Kitt and Deborah Tibensky went with Charles and Thomas and returned with glowing tales of their adventures visiting with the people they met in the Maasai community. Don’t have a photo of Deb with from the visit, but here’s Sandi with Thomas.

My own experiences with Thomas and the Maasai community were captured in several posts here in 2010. The following were posted in May, 2010:

As for Benanav’s good article, I enjoyed spending time with it. Several of the friends with whom I was on safari and I have discussed some of Benanav’s descriptions and stories. His focus is on a particular person (as have been ours, with Thomas) and it’s clear that he and Salaton Ole Ntutu, a Maasai chief, share a very special bond (as did we, with Thomas). Salaton is an informative companion and provides much background and commentary about life in the Maasai community, and Benanav makes a good case for visitors to come to the Maji Moto Maasai Cultural Camp. At the camp, part of the village of Maji Moto, Benanav notes that – as he puts it – “visitors stay in his tribal community, learning about the ways of the Maasai and getting a feel for the landscape they live within.”

It’s a far deeper experience that what we did, and I’m sure visitors who embark on a stay at the camp come away with a strong sense of what life is like among the Maasai. Indeed, in a way I wish I had done something like this, just to “drill down” a little deeper into the Maasai community structure and life.

Benanav’s article also describes his visit to the Masai Mara National Reserve
(about 35 miles away from Maji Moto) and his delight – with Salaton as his guide – in the Great Migration. Actually, while I don’t know the dates when Benanav was there, it’s possible we might have been viewing the migration at the same time. I just hope some of his experiences were as much fun as ours (and perhaps – for some of ours – a little less exciting).

It’s a good story, and another valuable resource for anyone considering a safari in Kenya. Lots to see and write about.