So now we come to why Mr. Guy has come to the Masai Mara Game Reserve. The views are without a doubt magnificent to see, and there’s no question but that coming to Masai Mara to see the landscape is a very special experience. Indeed, I imagine there probably are people who travel around the world to look at the different scenery we humans have been blessed with. When I reflect back on seeing such things as the national parks in America (and thank you, Ken Burns, for last autumn’s exceptional programme – want to do something like that on Kenya’s national parks?), and the special treats I’ve had visiting some of them with family and friends, I can understand why viewing the landscape is a very special experience. And, yes, that first visit to Yosemite 13 months ago sort of changed my life, in terms of appreciating the natural beauties that are here for us to see, and that same special feeling came to me again last winter, when I was left in awe by the majesty of the scenery at Hell’s Gate National Park here in Kenya. 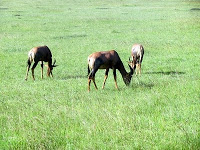 But it’s not just about the scenery, is it? It is about the people, who you’ll meet and what you’ll learn from them when you go on safari but – perhaps? – equally important it’s about the animals, what you’ll see and learn about all the other creatures that are out there. Friends have a good time playing with my on-going debate about which of the African animals is my favorite and I’m still playing the which-one-do-I-choose-? game. It’s only a game, of course, because all the animals are so special, but as I hope the next few posts will demonstrate, it’s kind of nice to think about what makes these animals so special, and why knowing about them and seeing them contribute so much to one’s understanding of the wonders of nature.
This first collection of animal photographs is presented just to give you a general idea of the variety of animals that can be seen at Masai Mara (or indeed throughout Africa, depending on viewing and driving conditions). On this safari – although it wasn’t particularly part of my plan anyway – the big five was narrowed down to Mr. Guy’s “big four.” These were the African buffalo, the African bush elephant, the lion, and the rhino, and the last probably shouldn’t count anyway as I saw rhinos only a few times, usually alone (not in herds) and very far away. No leopards on this safari and in fact no leopards since I’ve been in Africa this time, although as I’ve noted I had my splendid leopard experience in Kruger National Park in South Africa (which no one believed!). The only other (slight) disappointment was that I didn’t see any cheetahs in the Masai Mara Game Reserve and that surprised me, as there is a healthy popular of about cheetahs on the plains and one usually has the opportunity to see the cheetah. Next time.
I hadn’t even thought about looking for the mongoose but – as the first photo in Mr. Guy’s Masai Mara (9) Album shows, we did just chance upon a large group of mongoose, probably the dwarf mongoose, since these little fellows are highly social and we saw a bunch of them all together on a huge termite hill. But they didn’t seem small enough to be considered “dwarf” so perhaps they were the banded mongoose, the slender mongoose, or the marsh mongoose. They were definitely not the white-tailed mongoose. Nice sighting.
Other of the less spectacular (shall we say?) animals were the impala – so many of them! – and the ugly old wildebeest. This last is a southern hemisphere phenomenon (we don’t have them in North America), and one usually sees many of the wildebeest together, since they are highly gregarious (and it’s the wildebeest – some two million of them – which make up the large portion of the travelling wildlife in the annual Great Migration). Sometimes confused with other antelope-type animals, when one gets a little closer it’s easy to spot the wildebeest because of its slighter build and its shaggy beard.
And as shown in the photographs, there were a few others, including a delightful encounter (well, we were in the van) with a funny-looking spotted hyena heading off into the high grass, and the very beautiful and elegant topi, shown in the first picture above. This latter has a darker and glossier coat than some of the other large antelopes, and is easily recognized by its bright yellow lower legs. Not quite so gregarious as some of the other animals, the topi is usually found in small herds (probably for protection) and prefers being in the open grassland. 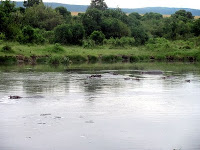 The so-called “Common Hippopotamus” is another spectacular animal – not for its beauty, of course, but just because it is what it is. There is an amazing collection of hippos at the Masai Mara Game Reserve, and there are a number of “hippo pools” scattered throughout. We chose to head for a little more high-end viewing at the Keekerok Lodge (although it didn’t cost anything, since the management of the lodge long ago evidently decided that it’s in its best interest to simply invite safari visitors to walk through the main reception area and be greeted by the delightfully friendly staff). At Keekerok there is a large built-up wooden ramp available for walking about the hippo pool, and they’re all there, hard to see of course because they stay mostly submerged most of the time! But we got to see enough of them, and, yes, to hear that amazing sound they emit from time to time. And we were even lucky enough to see one of the hippos emerge from the water and head out somewhere (in the final hippo photo) to, I suppose, have some morning meal or something. 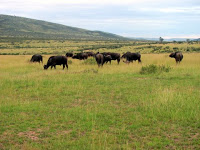 The African buffalo, too, is also very common to Masai Mara (and elsewhere in Africa). They’re pretty big (up to two tonnes in weight) and back when the “big five” categories were being designated, the white hunters regarded this great ox as the most dangerous of African animals. They are sort of all over the place (there are estimated to be a population of over 1 million of these animals spread out across Africa) and they are not shy about charging anyone (or any vehicle) that gets between them and where they are headed. In fact, because they are so grumpy by nature, especially the older African buffalo known as the “Dago Boys,” they are best avoided except from a distance. They love to wallow in the mud (“dago”), and while they are notably quieter than other animals of their type, they do move about a great deal and they are noted for stopping to stand still and “stare down” a possible intruder or annoying visitor. In most cases, I’ve been told, this is because they simply don’t see very well. They are chronically myopic!
Finally, I will say just a word about the majestic owl I found sitting at the top of a big tree. As I’ve noted before, I’m sorry I’m not more learned about birds, and my lack of knowledge in this area sort of restricts my pleasure when I am out and about (and observing how serious some other people are about birds). I did get to enjoy – and learn a little – at the huge collection of stuffed birds at the Nairobi National Museum, but I’m purely a crass amateur when it comes to birds. Still, I could not help but be impressed with this beautiful sight, and it makes a nice concluding photograph for this post.