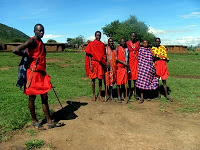 As we move on into the relations between the men and the women of the manyatta, perhaps this from a recent books I read will help:
“As Maasai society is polygamous, an elder can take as many wives as he can afford and father as many children as possible. Conventionally, a Maasai man of the active Ilmoran (warrior) age-set is forbidden from marrying or starting his own manyatta until the next ilmoran generation is initiative, when he and his peers – typically in their early to mid-30s – become junior elders, the group responsible for political and legislative decisions. Women, by contrast, are usually married off in their teenage years, leading to a large age discrepancy between a man and his wives.”
So I was a little misinformed when I was trying to describe the lives that Tomas and his brothers and half-brothers live. Now I understand a little better, especially since Tomas was so good about explaining what we would see when the men and women would come to “dance for you,” as he put it.
It was, needless to say, different from any other dancing I’ve ever seen and yet, it had such typical connections with the dancing we expect from men and women, especially in terms of their usual roles. For example, in this series of photographs (look in Mr. Guy’s Masai Mara (7) Album) I am taken by how athletic and energetic the men’s movement is, almost as if we were watching one of the sort of “competition” men’s dances at the New York City Ballet. It’s very rough, very raw, and full of athletic prowess. 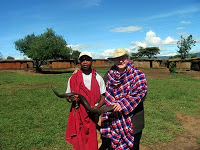 Charles and I weren’t even asked if we wanted to don the shukas. They were just draped over us as the dance was about to begin. The music is mostly sung, although that great horn we’re holding is used later (as you’ll see) by one of the “brothers” while the others dance.
The music is more of a rhythmic chanting, but punctuated with heavy grunts and smacking sounds, and, yes, there is a sort of story to the dance. 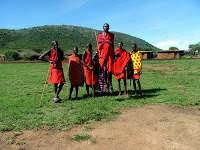 As Tomas tells it, the dance represents the athletic strength of the young men (well, I suppose a little older than that, if the above quoted information is correct and the men are looking to marry). The dance is shaped to demonstrate that the men are strong enough to marry up with a girl of a nearby village (not manyatta) and the idea is that the man who can jump the highest is the most eligible of young men. Not sure about all this, but that’s how it was explained to Charles and me.