We had seen many of these family compounds, known in Maasai as a manyatta, as we drove around the Maasai countryside, both on this safari and when we had returned from Kisii some weeks back. They are not villages, as such. Instead they are compounds where the extended family of one man lives. Let me try to explain (I’m not sure I can). 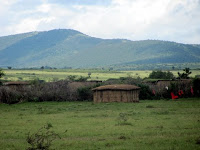 The whole situation centers on the man, and I have been led to believe the situation Tomas shared with us (when I described it to others) is fairly typical. His manyatta, which we see here from a distance, is a compound of houses created by his grandfather, for his six wives and their children. Tomas is one of the children of one of the grandfather’s sons, and his father lives in the compound with his three wives and their children. Each wife has her own dwelling (which the women build, using heavy sticks and cow dung but unlike the houses we saw in Nyanguru Village in Kisii, these houses are not covered over with dried mud, to provide a baked-on plaster-type of finish). As you can see in the photographs in Mr. Guy’s Masai Mara (5) Album, these houses are pretty raw. The structure of the manyatta is circular, with an outside fence made up of sticks and branches and dried leaves, about six or seven feet in height, and it is there to keep the lions away from the cows (we were told). There is one narrow entrance – about three feet wide – and it is covered by a separate gathering of branches and twigs, put in place when the people of the family retire for the night.
The cows? Yes, they are driven home each night, from wherever it is they are grazing, and they come to the center of the manyatta. In some manyattas, there is also an enclosed circular space in the center for the cows, but in Tomas’s manyatta, there is no enclosure. The cows are just brought in and wander about in the space inside the circle of the fence and the dwellings.
Many children were about and, as usual, I was fascinated by them, but unlike other African children I have met, these had nothing to do with Charles and me (although they kept an eye on us all the time! – they weren’t quite sure what we were up to). We weren’t invited to speak with them, or pay much attention to them, and it seemed to me that they liked it that way.
Although I felt a little as if doing so would invade the families’ privacy, Tomas kept inviting me to take pictures, assuring me that we were welcome to take as many photographs as we liked. And with all the colors of the shukas and the other beautiful garments the people were wearing, it was a wonderful photo opportunity, and I had a good time. And learned a lot, and now I know, for example, why most shukas are bright red, or some version of it. Wildlife are uncomfortable with the color red (associating it with fire, perhaps?) and one wears red in the forest to keep the animals away. It was a fact we discovered ourselves one morning, when we unexpectedly found ourselves nearing a herd of elephants. Tomas and I, standing in the van with the top open in the cool morning air, had wrapped ourselves in shukas and as we got even not very close, the elephants started moving away. Tomas surmised it wasn’t the van – which elephants see all the time – but the bright red fabric we were wrapped in. Could be.
As for the residents of the manyatta, I had a hard time getting my arms around all the relations, but apparently Tomas and his brothers whom we met and interacted with – a little too old to live in their parents’ house as they have already been through their initiation and “warrior” period (which I’ll try to explain later) – are among 26 siblings of their father and three different mothers. All told, some 120+ people live in the manyatta, all descended from (or connected with, I suppose) Tomas’s grandfather. 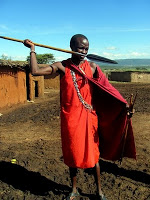 As for family life, here’s the picture I get: the men concentrate on hunting.
They use only spears and knives, and in the course of our time together, Tomas invited us to go on a nature walk. When asked what our protection would be, should we come across any wildlife, he assured us that his spear and his knife would be all that was needed, and he was quite proud of the fact that he had had his four years in the bush, and he would be able to protect us. Charles and I declined the nature walk, with great respect.
So the men concentrate on hunting and tending the cows (the Maasai don’t say “cattle” when they speak English), sometimes going far away during certain seasons of the year. The boys tend the cows (and goats and sheep) closer to home and, as I’ve noted, drive the cows home every evening, to be enclosed within the manyatta.
The open field in the center of the manyatta is used for the young men’s initiation rite, in which the grandfather supervises their circumcision in the open area (I presume it is at a time when the cows are not there). There is an important stake in the ground where the grandfather stands, and all the ceremonies take place in front of him, with all the residents of the manyatta present. The boys are then given their spear and knife and sent to the bush, where they live for four years, learning how to take care of themselves and each other (they usually go in small groups, sometimes as few as two, but never alone).
It was after telling us this that Tomas invited us to enter the house. I was a little frightened, not the least because I had to cross over the wet muddy field where the cows come in each night and I had the distinct impression that what I was walking through was not just mud (and in fact as you can see in one photograph, Tomas extended his hand to help me when we left the house, as it is very easy for a muzungu to slip and fall in the much, apparently happening often!).
Inside the house, it was pitch black (we used the flash – at Tomas’s suggestion – to take the pictures) but we inched our way through, into a small room, probably six feet by six feet. This was the main room, with cooking apparatus and a hard wooden bench on which I was invited to sit, as it was the seat of honor. This seat of honor is also the bed for the parents. In a tiny room off to the side was where the children sleep, and in an even smaller tiny room, a long enclosure for the “baby cows” (the Maasai don’t say “calves”). Altogether, eleven people sleep in this tiny space.
As I said, Tomas and his adult brothers (some shown here, and many in the outdoor photos) live elsewhere, but I was never told where. They are all looking to marry, but they must each collect a dowry of at least ten cows plus another ten to indicate their developing wealth and since Tomas – in his mid twenties – doesn’t yet have these resources, he and his brothers in the same situation must wait.
And on the other delicate subject that was raised, quite openly and not by me or Charles? Impregnating a girlfriend isn’t really a problem because she has the baby and when she is married the baby comes along as part of her family. Say, what? This was a little hard to deal with, coming up as spontaneously as it did, but I got the picture.
As we prepared to leave the house, Tomas proudly found the lion head he wears for ceremonial occasions. He killed the lion when he was a warrior (I don’t think that is quite the right word but it’s what the Maasai use to describe the young men living in the bush), and it, along with his initiation ceremony, is proof of his manhood. He and all his brothers have – or aspire to – the status of manhood to define them as they move into their lives as adults.