In a game reserve as large as Masai Mara, it’s not surprising that there are quite a number of places to sleep. Several lodges – mostly high end – make the safari experience a particularly pleasant one and, as noted earlier, it’s nice to have the lodge staff willing to prepare a packed breakfast for an early morning game drive. I also hear that some lodges prepare picnic lunches for guests, but as I was not planning to be out in the middle of the day, it was not something I looked into.
There are less expensive places as well, so having a safari in the Masai Mara Game Reserve does not have to be a budget-breaking experience. And for those intrepid souls who want to sleep out in Africa, there are sign-posted campgrounds (some noted as having “limited facilities” and some even stating “no facilities”) but the idea of sleeping so close to the wildlife just didn’t have enough appeal to me, so I did not investigate the campsites. Even in the lodges it isn’t unusual to see signs recommending that guests avoid wandering off the blocked off paths and – so I’ve been told – there are even some lodges must be accompanied to their cottages by a lodge employee (whether the employee is armed or not is a question I did not bring up). And at the Sopa Lodge, for those of us departing on an early game drive – leaving a little before dawn – each of us was met by a uniformed employee to walk us to reception, to pick up our packed breakfasts and meet our drivers. 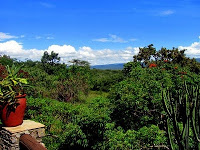 The staff at the Sopa Lodge (it is a chain of several,
in both Kenya and Tanzania) is famous for its friendliness, but I honestly don’t see it as any different from any other Kenyan people I’ve come in contact with. But the name fits (“sopa” means “how are you?” or “hello” in the Maasai tribal language), and as you can see from this photograph, in addition to the friendliness of the staff, another pleasing characteristic of Sopa Lodge is the spectacular view. Spread out over a handsome ledge in the mountainside, you can see for miles, and as shown in Mr. Guy’s Masai Mara (4) Album, it’s a very pleasant resort indeed. The entrance is on several levels, with guests entering from the top and walking down a nice flight of stairs to reception, where they are greeted with hot towels “to wash the dust of the road away” – a gesture that couldn’t have been more appreciated. And the views in the album that seem to be from someone’s porch? That’s right. That’s what I saw from my door as I went out each time. 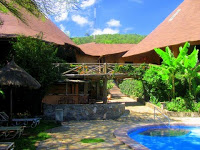 From the main entrance, the stairs lead down to the main lobby, the bar, and the very elegant glassed-in dining room, in front of which the monkeys put on quite a show (or at least they did the one morning I had breakfast in the dining room). They’re forbidden of course but they make their way up to the glass and when I saw one server step out on the stairs to throw something and them and make them scurry away (there must have been thirty of them), they all dashed into the trees and the next thing you knew they were throwing things back at him! And they are determined little devils, even having figured out how to get under the overhanging eaves outside the dining room and make their way into the rafters inside. Quite a lively scene, I can tell you!
The main entrance has the two lovely mosaic-type art works to greet visitors, and all the public rooms and even the cottages have very nice African art in them. The décor is not surprisingly African rustic, with much of the furniture made of smoothed over rough-cut wood and the upholstered furniture using great sections of the Maasai shuka as cushion and other fabric areas.
One of the great attractions of the Sopa Lodge was the availability of Maasai guides. Charles had expected we would have local guides, and indeed while I was resting after our journey he came upon Tomas waiting at the gate to the lodge, offering his services. Having experienced the rangers as guides in the national parks and local citizens as guides in other reserves, I was surprised at how little Tomas was offering to charge to be our guide. Needless to say, at his remarkably low price, we hired him on immediately (that’s his photo in the album). He speaks English very well and, indeed, his name was given to him by his English schoolteacher when he was a boy.
His first suggestion – although he was very delicate about it, as he did not want to appear to be forcing us – was to invite us to his “village,” as he put it. In fact, he was inviting us to his manyatta, they typical family compound where the Maasai people live, and although several manyattas – very spread out – might make up something like what Westerners think of as a “village,” what Tomas was offering was a look at life as it is lived in the Maasai countryside. We asked if there would be a charge and he said that would be up to us, as it would not be part of the guide fee. We suggested an amount and he seemed pleased, for as it turned out both our contribution to see the Maasai manyatta and his fee were not for him, but – as with all financial resources coming into the family – were to be contributed to a common fund for the manyatta.
Now with Tomas prepared to lead us into the afternoon, we took him up on his offer to visit his manyatta, after which we would have our first game drive in the reserve, to see what we could see before nightfall.