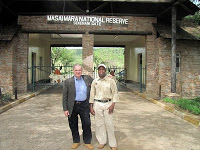 We arrived at the Sekenani Gate about noon, ready to say good-by to the Masai Mara Game Reserve and to begin our five-hour drive back to Nairobi. It would be an uneventful return (no policemen looking for rides this time!), and we got to go through such a wide variety of Maasai countryside that the time went very quickly.

The police continued to be a presence, of course, often pulling the matatus off the road to ask for identification and the contribution of “a little something” to be allowed to continue. And we were pulled over as we approached Narok from the Masai Mara direction. Charles was not too concerned, as this is a pretty common situation, particularly for a van with a single muzungu aboard. It seems that any number of people (usually the tour operators, not the tourists) “talk their way” into the game reserve without paying the appropriate – and expensive – fees and of course come away without any documentation that they had paid. So it’s pretty routine as some of the tourist vehicles approach Narok for the driver to be called into the tiny police “station” (more of a cinder-block hut really) and sit down for some negotiation.

We had no problems, though, as our documentation was all in order, and after a few minutes Charles came back to the van and we continued our journey to Narok, and on to Nairobi. Whether any “little something” was contributed I do not know, but I don’t think so. Charles is pretty good at dealing with that sort of thing. 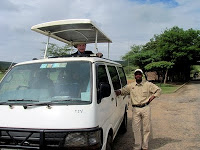 No photographs this time, because I had captured many photographs of the Maasai countryside on the trip from Kisii a few weeks earlier – and some on the first part of this journey – and I was no longer so amazed as fascinated by the condition of the roads that I needed to photograph them. And, indeed, the highway from Narok – the good paved road we had travelled earlier – was no particular challenge and because there was relatively little traffic, I got to enjoy the flat scenery with all the farmland and the manyattas off in the distance, as well as the rolling hills and in some places the beautiful high mountains.

So just your usual beautiful Sunday drive into Nairobi, across some beautiful mountains (with lots of truck traffic) and of course the expected heavy – and I mean heavy – downpour. But we had no problems, and made it back to Nairobi in good time, happy to be home and conclude a remarkable Kenya experience.