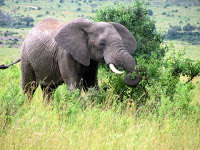 Charles and I planned our final game drive for Sunday morning, since the Sekenani Gate, where we had entered the Masai Mara Game Research and from which we would leave, was quite some distance from the Sopa Lodge and it wouldn’t make sense to circle back around. So we decided I would check out of the lodge after breakfast (complete with monkey entertainment, which I described in an earlier post) and we would take a nice leisurely game drive through a big chunk of the game reserve.

As we would not be having Tomas with us on this game drive, we had said our good-byes the previous evening, after he had very kindly gone back to his village and then returned (coming to us via a 15-minute or so walk through the forest in the dark – I can’t figure it out!) to bring us our presents. This gesture surprised me, for we had bought some Maasai souvenirs when we were at the manyatta, including some very handsome beads (pretty typical but still very lovely), and we didn’t expect to have anything else. But he was very good to do this for us, and I asked for his address so that when I return to Masai Mara with friends in December, we can try to have Tomas for our guide.

We were not really looking for anything in particular on our Sunday morning excursion, and after the experience of the previous afternoon’s game drive, it would seem a little greedy, perhaps, to want to see more. And truth to tell, there were not a great many animals about, at least as far as we could see. But sharp-eyed Charles was not to be deterred. Just casually looking around as he drove along (we were still on the “main road,” such as it is), he suggested we go off onto some different tracks, and we got lucky, as you can see here.

At one point, we cut across the high grass and made our way up a slope and around another curve and there, off in the distance, was our Sunday Elephant, having his mid-morning meal. He was quite a handsome fellow and we were not surprised to see him alone, since Thomas had earlier explained that phenomenon to us.

We drove to the top of the sloping hill and we found we were able to get quite close. We turned off the engine and – as had become our pattern now – just sat quietly and watched him. By playing with the zoom, we were able to get some neat pictures (ready for you at Mr. Guy’s Masai Mara (14) Album – the final set of pictures from this safari). 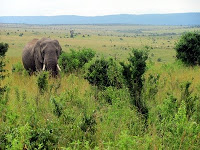 Our Sunday Elephant. What a lovely way to end our safari to the Masai Mara Game Reserve! We stayed with him for a while, and in the final shot, taken just as we were moving away, Mr. Guy – ever the romantic – got the impression that Mr. Sunday Elephant was perhaps – like us – a little sad to see us leave.

But leave we must, so off we went to the gate, to head out of the game reserve and back to Nairobi. A fine way to bring our safari to its end! And as for the question about Mr. Guy’s favorite animal, of all the wildlife he’s seen? Well, I think that question has been answered now, hasn’t it?