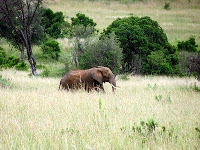 So perhaps it’s time to ‘fess up. If any readers of these posts have noticed a kind of lead-up, you’re right. There has been so much to write about, and so much to see and share, and since we’re all agreed that this is the experience of a lifetime for Mr. Guy (who ordinarily doesn’t think of travel and adventure as something he would do, if he didn’t have to, say, for work), I’ve tried to put some theme in these posts. Particularly this last one, to the Masai Mara Game Reserve, was just so full of adventure and splendid things to see, I just couldn’t do it without some structure.

And typically for Mr. Guy, the structure has a shape leading up to something. So before we say good-bye to Masai Mara, I will share what is probably going to be my one true love (well, in the animal kingdom).

Ever since last autumn, when I first arrived and Charles took me to the elephant orphanage (where I’m going again – with friends – this Sunday, as my own special treat to myself before I leave Kenya for a while), I’ve been fascinated by the elephants. I’ve always loved them, of course, but had no idea that seeing them in their natural habitat would be such a gripping experience. And since I didn’t have a camera when I went to the elephant orphanage in November, we can expect some photographs of that treat next week.

In the meantime, though, I want to share the Masai Mara elephant experiences. I’ve felt a little slighted on these several Kenya safaris – the ones that have come before now – because so many of the places we go are too small for the elephants to roam freely, and you just don’t see very many of them. To really enjoy the elephants, you have to go to a really big place, such as Masai Mara.

The African bush elephant is a pretty remarkable creature, and no matter how much I read about him, I continue to be amazed. First of all, he can weigh as much as 13,000 pounds (I find that really hard to believe but why not – he is huge!). And he communicates not only with that trumpeting blast you hear from time to time, but through very sensitive vibrations through the skin of the trunk and the feet. We human beings cannot hear these “subsonic rumblings” (one author called them) but for the elephants, they can be sensed miles away.
Just amazing. 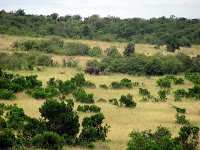 I love the fact that the elephants are so prone to stay together, although we came across several situations where a single elephant was out in the area all alone. No matter. Charles and I had a good time watching them, and on the first occasion, it was Tomas – our Maasai guide – who found this guy all by himself. So we approached as close as we could, I tried to be very careful with the camera, and we sat silently for a long time, just watching and absorbing all he had to share with us.

And then, after he had had enough to eat, we watched him wander away and sure enough, there were some of his pals (family?) all in a bunch, and it was equally lovely to watch him join them and wander on into the forest. What a nice first game drive! And our first elephant.