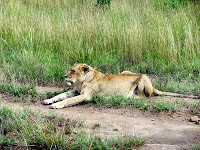 According to the people who study these things, there are about 250-300 lions who have territories in the Masai Mara Game Reserve, and the general consensus is that – if the weather is not a problem (which it seldom is) – travelers are practically guaranteed a lion sighting.
And having just seen a film a few days earlier describing the game reserve as “The Lion’s Battlefield,” I was pretty well geared up to enjoy some lion sightings.
I was not disappointed.
In fact, as I worked with organizing my photographs – Mr. Guy’s Masai Mara (10) Album – I realized that I had actually had four sightings, and each was a little different and a little special.
With the first, it was just one of “those” moments people talk about. Driving along, quietly observing the landscape, with Tomas watching carefully to see what we could see, Charles decided to leave the train we were on and move across some tall grass to another trail he had spotted at the top of a hill. We got there, and noted that the trail then curved around, going a little out of sight. It was a rough spot, so we slowed down almost to a stop, and as we inched along and rounded the curve, there she was. Probably one of the most regal lionesses I’ve ever seen, and not the least perturbed that we were nearby. She didn’t know she was stretched out across the road, I suppose, and she really didn’t pay any attention to us, just lay there, looking around.
But Tomas, so smart, and so experienced, whispered, “Watch her.”
She looked around at us and with the most beautiful grace, simply stood up, languidly, and strolled off into the grass. She wasn’t bothered by us and didn’t expect us to be bothered by her. It was just the way she was spending the day.
We next saw a group of lions (just three or four – not really big enough to be a “pride” I suppose) just ambling along through the grass, apparently looking for some shade for a quiet rest.
Then the sleeping lion. Oh, so beautiful and peaceful, just having the nicest time, not bothered by anyone and not bothering anyone. A few feet away, under a tree, another lion, this one a lioness with her babies, and we got to see them waking up, planning where they would plan next, I suppose.
And then the real joy: Mr. and Mrs. Lion, so elegant, so quiet, just relaxed and watching the world go by. What a sight!