One of the pleasures of life in Africa is the nearness of nature and the great beauty of nature, as one of my early guides described living in Kenya. You just can’t help being so thankful to be here and experience all this beauty and sometimes it’s almost a spiritual or philosophical experience.
As readers of these posts know, I’m doing my best to take advantage of this once-in-a-lifetime opportunity, and I’ve not been reluctant to go off on safari. I’ve had several private safari experiences (and I’ve  even learned to say “Safiri Salama” when I’ve met up with other travelers and we part, wishing one another “safe travels”).
All my safari activities have been arranged by the wonderful Charles, my driver, and by now he is probably my best friend in Africa. When I think what he has led me to and the experiences and adventures that I’ve had through his good efforts, I’m am very humbled. And very thankful. I could never have had this African adventure with my Charles.
Masai Mara was, in many ways, a grand (and planned-for and thus expected) climax to this phase of Mr. Guy’s  Mafrika time (I will be returning for more work – and more adventures – later in the year). We knew that it would be a big trip, for the drive to Masai Mara is just over five hours (and we’re very thankful to the new highway to Narok, which apparently has cut some three hours off the journey), and we took the decision to have two nights in the Masai Mara Game Reserve. It was a smart move, for it enabled us to have four very rewarding game drives, one the afternoon we arrived, two the next day, and one the morning before our journey back to Nairobi. 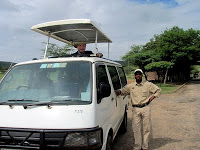 We used a four-wheel van for the safari, probably for a couple of reasons. First, as you’ll learn below, the FWV is not a choice if one is travelling into an area like Masai Mara. Secondly (and perhaps it was a little extravagant of one making a safari along) most of the vans open up, as you see in this photograph, and I would be able to stand and see everything I wanted to see. And, once I had my guide, would have him standing with me, to point out things I might otherwise miss.
For most of the trip to the game reserve, of course, we did not have a guide and I sat in the cab of the van, with Charles, where we continued with our many-faceted conversations, just as we always do when he is driving me.
And before I get much further into the tale, it’s important I think to make yet another reference to the roads, for Kenya has been fighting the battle of overland transportation now for several decades (I might have made some reference to the Kenya roads in the past). And with the influx of cheap used cars from Japan beginning in the 1980s, the old dirt roads just could not support the abundance of automobiles. So there has been progress, and once the Kenyan economy (especially around the four cities) began to pick up, suddenly people were buying new cars – in addition to all those four-wheel vehicles the expatriate community had been using for years – almost forcing the authorities to put resources into the highways. The job isn’t done yet – won’t be for a long time – but with the influx of Chinese funding and engineering labor for supporting the work and designing the roads, combined with the massive labor force here in the country ready and anxious to work – the highway situation is definitely improving.
Until you turn off the highway.
Now it’s a totally different experience (and I’ve experienced it – a little – on some of my other excursions). And if you take a look at the photos in Mr. Guy’s Masai Mara (1) Album, you’ll see some examples of what it’s like as one tries to maneuver beyond the hard surfaced roads. Fortunately, when a driver is as expert as Mr. Charles, most of the major potholes are avoided, and with his sharp eye Charles is able to discern quickly where the road is so rough drivers have cut a separate trail along another path (often parallel to the “real” road), simply because it becomes almost impossible to travel on the real road. The photographs demonstrate both the public road, on which one travels to Masai Mara, and the many roads and trails and tracks within the game reserve itself. And in many cases, since you’re in a 4WD, you can just cut across the high grass, but you try to keep to paths that have at least been opened up by someone else. A virgin drive through the grass can lead to some interesting – and rather delicate – encounters.
And as the photos show, all of the impediments to moving swiftly along the road are not just nature being disturbed. This is Maasai country, and Maasai wealth is counted in cows (as I’ll describe later) and when the cows are being driven back into the Maasai manyatta, the compound in which the Maasai family lives with their cattle, they have to cross the road. So you just wait.