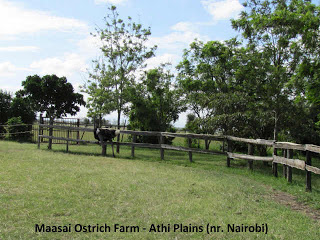 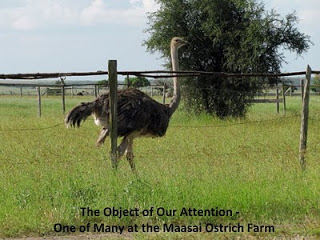 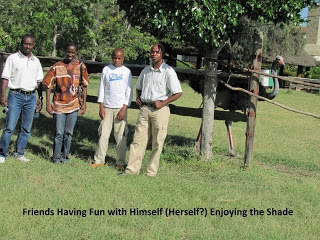 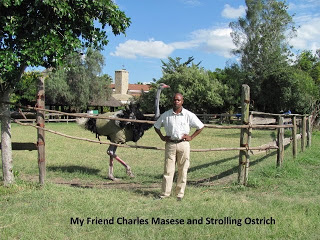 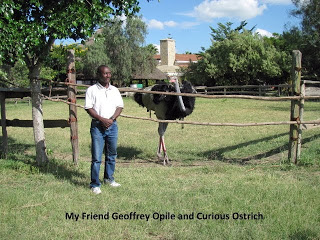 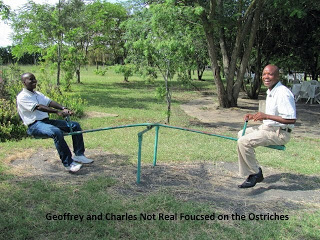 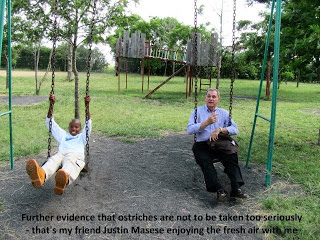 A recent Sunday excursion took a group of friends to the Maasai Ostrich
Farm, now a rather swell resort, part of the Merica Group.

[Yes, you read that name correctly – it’s a hotel chain in Kenya (I stayed
at the Merica Hotel in Nakuru not long ago) but every time I see it I think
it should say “America” not “Merica”]

The resort is only 25 km (about 16 miles) from Nairobi’s City Center but it
seems much farther away, probably because of the condition of the roads.
Although it didn’t even dawn on us – even my driver – that we should use a
four-wheel drive vehicle, once we left the Nairobi-Mombasa Highway (very
soon after leaving Nairobi) it became very clear that this was going to be a
driving adventure. There’s much industry in parts of the area – including
two of the country’s largest cement factories – and the huge lorries
(trailer trucks) have done their work on the roadway. Probably the bumpiest
road I’ve ever ridden on, but Charles as usual was up to it and maneuvered
us along with great competence and even though all that jerking back and
forth prevented any real progress in terms of speed (our journey took over
two hours!), we got through fine.

The Maasai Ostrich Farm – apparently an original Maasai farm for raising
these big birds – is popular as an excursion site for both local visitors
and international tourists, who often stop by for a brief visit as they head
out of Nairobi on safari. The city is pretty much recognized as the safari
center of Africa and most of the popular safaris originate in Nairobi, so
the ostrich farm a natural and very convenient stop as a safari begins.

As day-trippers, Nerisa Kamar, Geoffrey Opile, Charles Masese and his
13-year-old son Justin, and I found our time at the Maasai Ostrich Farm a
very pleasant way to spend a Sunday. Despite the long trip, we all know one
another very well, so the conversation never flagged (that’s an
understatement – if knowledge management is all about story-telling, we five
must be among the most knowledgeable people around – we never stopped
talking!). And with Mr. Justin designated as the official photographer, he
was – like any curious teen-ager – continually busy.

As a resort, the Maasai Ostrich Farm is very nice, and the restaurant is
excellent. The specialty is of course Kenya’s famous nyama choma, the
national dish of grilled meat. Obviously the primary meat for the meal here
is ostrich, and we were surprised to find that our two platters of roasted
ostrich meat were very different. The first had a delicious flavor but was –
as we say – a little “tough.” Nevertheless, it was very tasty, and the meat
was certainly consumed with enthusiasm. The second platter, though,
completely surprised us, as it was as soft and as tender as if it were a
totally different animal which, as it turned out, it was. It was so tender
we could have cut it with a fork (if we had been using knives and forks!)
and when we asked about the difference in the two platters of meat, that was
exactly the reason we were given: the roast meat came from two different
animals.

Not to get too serious about why we were having the day out, after our lunch
we had a lovely walkabout, enjoyed seeing all the ostriches (we resisted the
temptation to take the ostrich ride!) and ended up laughing and playing in
the children’s area. Fortunately there were no children about, for we might
have left a rather confused impression about how grown-ups behave when they
are out!