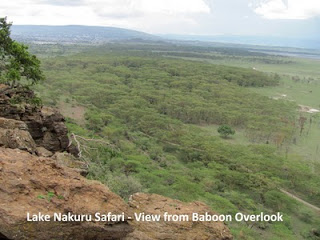 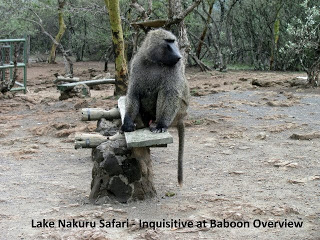 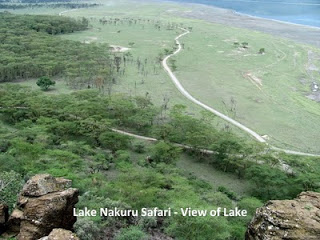 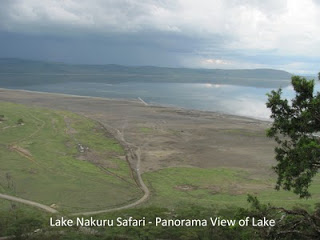 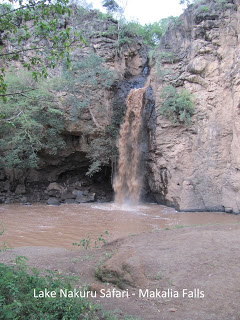 Continuing to enjoy the beautiful Rift Valley, I was happy to begin my Lake
Nakuru Safari with a trip around the lake. [The word “safari” by the way,
simply means “to travel.” To go on safari does not necessarily mean to take
on an elaborate journey, although today most people generally think of a
safari as a trip to explore uninhabited terrain and to view – and photograph
– the wildlife, especially any birds or animals one might not see at home.]
The lake, as you can see, lies in a remarkably lovely part of Kenya, and I
knew the experience would be rewarding from a visual point of view, even if
there was nothing else to catch my fancy.

Well, that was not to be the case. There was much to explore, and I got to
see everything I wanted to see. I had made the decision not to go with a
group for this safari. I specially wanted to go to Lake Nakuru – famous for
the flamingos (about which more later) – and for some reason I had the idea
that I would enjoy the experience more if I were not with other tourists. So
my driver and I did all the planning ourselves (well, it was mostly my
driver), and probably in the end I saved myself a lot of money. Nairobi is
the safari capital of Africa, and most of the agencies putting safaris
together for the tourists sort of assume that all travelers are high-end
tourists, which is not necessarily the case. So Charles and I decided to
tackle this one ourselves and we did a pretty good job of it (he says
modestly).

One of the first subjects that comes up when you arrive at the Lake Nakuru
National Park and have settled yourself in with your guide is the drought.
For several years now there has been a shortage of water all over Africa,
but here in the central Rift Valley the drought has been especially bad. In
fact, until just a few weeks ago, there had not been any rain for over eight
months, and the last several years had been noticeably dry. That’s strange,
because in other parts of Kenya – and especially in the Nairobi region –
this is one of the wettest years on record and the “short rainy” season,
which was supposed to have ended over a month ago, is still with us. And
very much so.

But as you can see from the photographs, Lake Nakuro is really suffering.
According to some (our guide included), the lake is now over half its normal
capacity, and you can see how the shoreline has receded so dramatically. Of
course the wildlife are suffering, with many simply dying because they
cannot get enough water. And the saddest fact, from one perspective I
suppose, is Lake Nakuro National Park’s famous Acacia Forest, reputedly one
of the largest (and most beautiful) collections of acacias in the world. But
now with the water table below them gradually drying up, even those splendid
trees – almost iconic in their connection with Africa – are suffering,
weakening, and many of them just falling over. It is very sad indeed.

As we drove throughout the park, we were delighted to see several small
streams feeding into the lake, and at least some water is being contributed.
But most of them are pretty muddy (as are so many of the other small rivers
I’ve seen when I’ve been driven around the parts of Kenya I’ve visited), but
the muddy water doesn’t lessen the spectacle of grand old Makalia Falls. OK.
So it’s not quite Bridal Veil Falls as my friends and I saw it last April at
Yosemite, when the snowmelt was at its height and the view couldn’t have
been more breath-taking (and since I know they are reading this I’ll ask
them to withhold any caustic remarks about Makalia Falls looking a little
puny – of course it is by comparison with Bridal Veil Falls or the even more
spectacular Yosemite Falls when the snowmelt is so fresh). Nevertheless, as
you can see, Makalia Falls is in its own right pretty spectacular.