There’s probably no better way to convey one’s impressions of a different place than to describe how people have fun together. As it turned out, my pals and I were up for a good party back at the beginning of the month when my friend Joseph Gichuki decided to have a party for Mr. Guy. 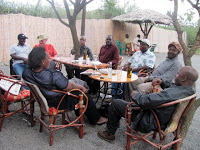 We later learned that the party was to be an all-day affair, somehow built around the goat we were going to be eating. That idea didn’t come through to me, and we arrived after the goat had been slaughtered and was being grilled. But even if we missed the beginning of the festivities we still – to no one’s surprise – had ourselves a swell time.

We gathered at a place Joseph knew, and the event included a lot of just sitting around and visiting, which was very nice. No formal agenda or activities, just enjoying each other’s company. New people joined us – friends of Joseph and his wife Esther – so the conversations covered just about every subject that has come up since I’ve been in Kenya. We spoke about politics and the new constitution, of course, and there was also lots of talk about the cultural differences between the Americans and the rest of the world – a very popular topic of conversation for international visitors these days, especially this time, just a few days after the mid-term election in the United States. My Kenyan friends – both old friends and new people I met for the first time – were intrigued with what’s going on in the U.S. and conveyed to me, it seemed, some nervousness about the results of the election.

Such talk did not inhibit our good time – not with this crowd. The Tuskers were eagerly enjoyed (Tusker being the popular brand of bottled beer in Kenya), and we had many good comments (and O.K. – a few laughs) about how Mr. Guy looks in his African shirt. Made from the fabric used for the Maasai shuka, the colorful wraps worn by not only the Maasai but just about everybody else in Kenya, the shirt was a present as we started off on our excursion to the party and I was delighted. Finally I’m going to be dressed like some of the fellows I see as I roam about Kenya.

A Maasai vendor lady visited us, and while none of us was particularly interested in making any purchases, Joseph did decide that I needed a beaded Maasai wristband to go with my shirt, so instead of the guest giving the host a gift, the gesture was turned around, and I’m very grateful.

Indeed, very grateful all the way ’round to Joseph and Esther for provided such a lovely day and this happy party. It was truly a good time, and we really enjoyed ourselves. The Tuskers were delicious on a warm early-summer day, and all that good goat meat just kept coming and coming. While none of us really overate, I suppose, we did consume a lot of goat (must have been a big goat!).

And as part of the goat-eating, I experienced again something that’s been happening to me recently in Kenya: the elegant respect for me because I’m older. I’ve long known that the Kenyans (and possibly all Africans, for all I know) have a particular code of behavior with respect to the elders of their society, but somehow it had eluded me that I’m one of that group. No one has – during my time in Kenya – made any particular comments or deference to me because of my age (well, except for with my best buddies, who do make lots of humorous comments about the wide gap between their ages and mine!), but in the last couple of weeks or so, I’ve noticed a little trend in this direction.

And it was made very clear at this party. I asked about it, and when Joseph and some of the other fellows explained to me why I was being treated in a special way, I was very honored. It was almost as if my age had moved me from being simply a tourist and/or a temporary employee in their country to someone (almost) matching the position of their own elders. At the party, the idea was made manifest in a couple of very sweet gestures. For example, when food was served (as it was many times during the day) it was put in front of me first, and I realized that everyone was looking at me. When I asked what was going on, it was explained to me that it was my job – as the oldest person present – to pick up my piece of goat meat and begin eating first, after which everyone else would eat.

The same thing happened as we got toward the end of the meal (not the exact end, because we had to leave early for the drive back to Nairoibi, and we didn’t participate in eating the goat’s head or the ritual soup that ends the meal, to come late the day). I was handed a large piece of meat, still attached to a bone and it was my job – as the oldest person – to break a hole in the bone (which I finally was able to muster, when my friends showed me how to use a beer bottle as a sort of hammer to crack to bone). The purpose of the hole? Fascinating “cycle-of-life” sequence: the bone will be thrown into the field, the grass will grow up through the hole, and the other goats will eat it through the hole, thus creating a connection between the goats that provide sustenance and the people who will be eating the goat.

The photos tell the story, so interested readers can go to Gichuki Party 06 Nov 2010 to get the full description of this particular day in Mr. Guy’s life in Kenya.