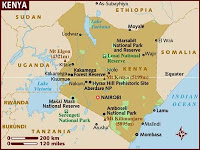 There is great excitement as this year’s vacation gets underway.

And as we plunge into our special experience, I can’t help but think about what-has-been (as Beryl Markham or Karen Blixen/Isak Dinesen might have written). The difference, though, is that this experience is not about leaving somewhere. It’s about going back.

Even so, Markham herself shared that sort of reverse mental picture as she wrote about a big change she was experiencing in her life.

Here’s what she wrote at the opening of Chapter IX of her memoir (West with the Night):

Somebody with a flair for small cynicism once said: “We live and do not learn.” But I have learned some things.

I have learned that if you must leave a place that you have lived in and loved and where all your yesterdays are buried deep – leave it any way except a slow way, leave it the fastest way you can. Never turn back and never believe that an hour you remember is a better hour because it is dead. Passed years seem safe ones, vanquished ones, while the future lives in a cloud, formidable from a distance. The cloud clears as you enter it. I have learned this, but like everyone, I learned it late.

I’m not sure I’m in agreement with Markham on this.

Yes, I very much support the contention of many, including our special Peter Drucker, whose thoughts about re-inventing one’s self connects here. It is best to move forward, “opening a new page” as we move into an unknown (or perhaps – in this case – known) future. In my way of thinking about it, though, I tend to be more focused on what’s coming, and what that future will bring and – I must admit – that I’m not too concerned with that “dead hour.” It’s gone, it’s respected, I’ve learned from it, but I’m much more interested in what I will learn.

All this comes to mind and resonates with me as I think about my visit to Kenya. My pleasure in this journey is sweetly strengthened by the fact that this time we bring with us four “new” visitors, introducing them to our (almost) favorite place in the world. We brought two people into the I-love-Kenya camp with our safari in late 2010 (after I had lived there for a year), and now four more people will return to America to share Kenya adventure stories with their friends.

What pleasures do we expect? Certainly high on the list are visits with friends and loved ones who live in Kenya, people who have become part of our lives and who are simply referred to as “our Kenya family.” Other people? Of course. If there’s time I’ll head over to the client with whom I worked for a year and, perhaps, have a few “professional” conversations to review and be pleased with (I hope) progress made since my assignment ended. And perhaps some more casual encounters, perhaps looking up my barber, the lady who took care of me where I lived, and other people I came to know in my time in Kenya. 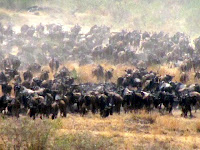 In truth, though, this year’s journey is holiday, a vacation from from the workaday world of my life in America. And the timing this year is carefully chosen, as it has been specifically determined by Africa’s Great Migration. As this is truly a natural phenomenon, the dates for the migration are based solely on when the wildebeests and other ungulates figure out that the grass is greener on the other side of the Mara River and dare to endanger their lives (some of them) to get across the river, attempting to get through the crocodiles to make a path for the thousands of others behind them, all of them trying to get to the green grass they need. And once they get across there’s another gauntlet, as other predators – larger carnivores – are waiting hungrily for them.

Still, many wildebeests, zebra, Thomson’s gazelle, and eland make it through (some 2,000,000, it has been estimated), and seeing them all as they transverse this great expanse of land is truly a spectacular site. As usual with me, once I experienced the Great Migration I couldn’t stop talking about it, which is why we’re going now and taking people back with us. And for those who are interested, my version of my earlier Great Migration experiences was told back in 2010 here at my personal blog. Take a look at the archive dates to the left; go to the posts between August 22 and September 25, 2010 and you’ll learn much about Mr. Guy’s experiences with the Great Migration. On top of that, there’s also a good picture of the Great Migration is the CBS News (90 Minutes) feature from 2009. It’s a good story, well-told.

As for what we’ll see, naturally we’re going to enjoy the spectacle of the Great Migration, but in introducing our friends to Kenya we’ll see lots more, including the spectacular scenery (lots of photos of that as well, in the 2009-2010 blog posts here at the personal blog). And Mr. Guy will of course take his pals to see his elephants, especially at the Amboseli National Park – in the shadow of Mt. Kilimanjaro. [And no, we won’t be climbing Mr. Kilimanjaro – I’ve wanted to do that for years but there are a very practical couple of reasons I’ve not done it: 1) I’m not really a climber and 2) I can’t find anyone who will train with me for the time required, so I’ve come to realize that Mr. Guy’s climb up Mt. Kilimanjaro will remain in the realm of fantasy!]

But there’s more at Amboseli, although it will be probably the elephants that will have my attention. As it turns out (I don’t know why) Amboseli is the one area of Kenya where the elephants have lived somewhat protected lives, and many of the animals are very old indeed. Very old and, as far as any of us visitors can tell, very gentle. The poaching that is ravaging Africa (and even taking place in Kenya, to some degree, even though Kenya seriously outlawed elephant poaching about ten years ago) does not seem to have made its way into Amboseli, making this park absolutely perfect for two spectacular game drives a day. And we intend to take full advantage of them.

We’ll also have game drives at the Nairobi National Park, the Tsavo East and Tsavo West National Parks, have a drive through the beautiful tea country to get to Kisii (where we’ll see more friends and other members of our Kenya family), and visit the museums and some of Kenya’s historic sites in and around Nairobi. We’re having a splendid adventure!

Come August, watch this space. [But don’t be disappointed if there isn’t be much written before then – I’ll do what I can but I expect I’m going to be pretty busy!]