A reference in Mark Bittman’s column yesterday (An Atheist’s Christmas Dream) reminded me of a special World War I moment I had earlier in my life.

Today marks the 100th anniversary of the “Christmas truce” of World War I, when soldiers from both sides left their weapons in the trenches and met in neutral territory to embrace, play soccer and no doubt drink to excess in the spirit of humanity. Although the acts were officially condemned, these “live and let live” moments were repeated throughout the war.

And here’s how his comments connected in my (much more recent, of course) memory:

Among the precious little treasures I have tucked away is a group of three World War I post cards found in a shop somewhere down about Hythe or Folkestone, in the time when I lived in England. I was mostly in Canterbury (although my research work took me all over the country), and in Canterbury, my best pals were Sandra and Colin Ward. When we could, we would take a day off and drive to the sea (as the English liked to say in those days) and poke about in different shops and markets in the several seaside towns we liked to visit.

Hythe and Folkestone were favorites of mine, and I remember how pleased we were when Sandra found these cards, one cold winter day as we were walking around, mostly stopping in the shops just to get warm. We weren’t really interested in buying much of anything, but Sandra had heard about these and I was very pleased when she told me the story behind them.

Apparently these cards were not all that unique, and I gather that during the 1914-1918 time period many of them were created (they show up – I understand – for sale to postcard collectors as simply “vintage sweetheart embroidered fabrication française” Paris postcards). Of my three, one card has a company name on it (“Paul Heckscher, Paris”).

I gather the designs were embroidered on a fairly lightweight, sheer fabric and inserted in a cardboard-like frame to make a postcard. The embroidery work was done – I learned – by the ladies in France, and then sold (for hardly anything, I imagine) to the English soldiers stationed in France, to send home to England.

So like the more-famous Christmas truce, the postcards represent another of those humanizing aspects of an otherwise inhumane situation, the horrible wartime environment these people were experiencing. Even today I have a few friends – my generation or a little older – who had fathers who fought in World War I and they still talk about the awful effect the war had on their parents.

So I’m happy I have these little “pieces” of sentiment, and it pleases me to share them here. 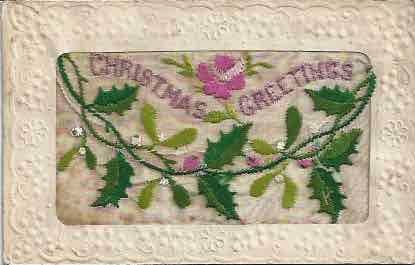 This card (above) is very special because I’m able to read the message on the back. No date, sadly, but the message – in pencil – reads: 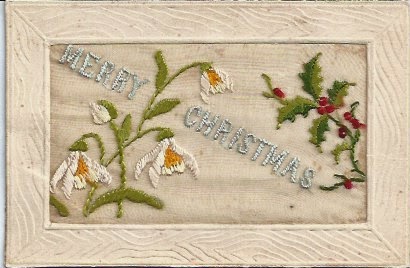 This one (above) is another Christmas card but all the writing on the back is gone. I would love to have known what it said. 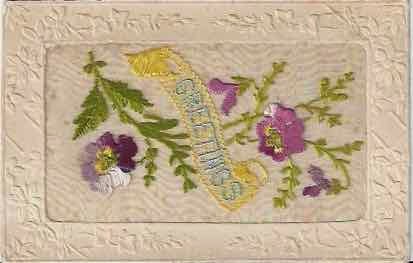 And the final one (above). Not really a Christmas card I suppose, because the embroidered design is mostly spring flowers. I’m guessing this one is a birthday card. It, too, has a message, one that is now hardly legible because it’s so worn.
I’ve been able to make it out, I think, and here’s what it seems to say:

Dear Olive,
Just a card to wish you many happy returns of the day
With love from
Tom

It’s nice to have these, now somewhere about 100 years old, and to think about what the men in the trenches and on the battlefields were thinking about. These notes now are, at least, some tiny remembrance of these men, as they wrote these messages to their sweethearts and children. Very poignant and, in a very different way, very lovely for us to have them as reminders of how much we and our loved ones mean to one another.