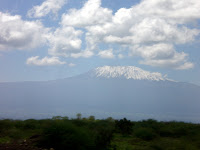 Stanley’s next big adventure (and ours) was to Amboseli National Park. As readers of these posts have learned by now, of all the splendid wildlife in Africa the African bush elephant seems to hold pride of place for Mr. Guy. So for a long time, Amboseli has been a goal for me, not only for its splendid view of Mt. Kilimanjaro (here’s how the mountain looked when Stanley first saw it, as we drove into the park) but for the great collection of wildlife, specially the elephants.

For some reason which I haven’t learned yet, the area where the Amboseli National Park is located was pretty much unaffected during the great poaching epidemic of the 1980s, when African bush elephants were slaughtered mercilessly for their tusks. As noted in one guidebook, the park “still harbors some of the region’s oldest and bulkiest elephants, sporting tusks whose dimensions have been consigned to history elsewhere in the area.” Also in the park is the Amboseli Elephant Research Project, started in 1975 and the world’s longest study of a wild elephant population. With something like 1,500 elephants in the park, visitors are treated to sightings unlike anywhere else.

So I was a pretty happy fellow in Amboseli, and I think Stanley and the other members of the safari were just about as excited as I was (here’s some of what we saw (other photos from our adventures with Stanley in Amboseli are at the Flat Stanley in Kenya album). We saw hundreds and hundreds of elephants every time we went for a game drive while were at Amboseli,, and it was an amazing experience. 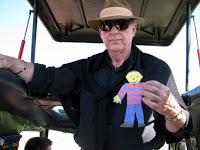 We also got to climb up Observation Hill, the only spot in the park where safari participants can get out of their vehicles, but we had a slight scare when we did that. Here’s a photo of me showing Stanley the climb up the hill, and as he was beginning to feel a little independent as we started up the hill, he decided to run on ahead of us. Not a good idea when you are only half-an-inch wide. The wind picked him up and just like when his brother and his friends were able to “fly” Stanley like a kite, he went whooshing up into the air. All of Stanley’s safari friends were called into action, running after him so he wouldn’t be blown out into the lower part of the dried lake, where the hippos (or rhinos – we couldn’t tell from where we were) were taking in the sun. Fortunately, we got to him, but we had to be a little stern with him, since Stanley has to stay with his friends if he doesn’t want to be blown away.