Masai Mara is one of the most famous game reserves in the world, a great place for a flat boy who wants to see some of the wild animals he has read about. I’ve had two previous adventures in Masai Mara, so I was pretty excited when I was going to be visiting the game reserve again with my partner. The others joining our big safari will be with us later, but for this visit it’s just Andrew and me and Charles (our wonderful driver and good friend).

There’s much to see and do, and the whole Masai Mara idea just seems to cry out to be shared with someone else (and so as not to repeat, if anyone wants to read about my earlier visits, go to the posts for my first trip to Masai Mara in May, 2010 and the migration safari, written about in September – see links to the left).

I’m a great fan of the famous (and well-managed) Sopa Lodges in Kenya, and Andrew and I opted to use them for this trip. One reason of course might have to do with my great love of the elephants, which the Sopa Lodge folks seem to share. Their decorators include images of elephants in the lobby’s wall decorations, giving Flat Stanley and me an appropriate background for our first Masai Mara photo op. 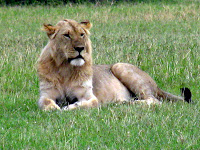 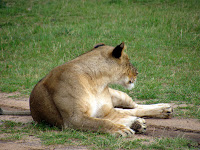 One of the reasons why Masai Mara is so well-regarded is the variety of wildlife. Some claim that lion sightings are almost guaranteed, and perhaps that’s so, since we had pretty good luck seeing the lions.These were resting in the sun when we first spotted them, and they were not at all concerned about having a vehicle stop nearby for some photographs. I continue to be intrigued with how docile lions can be when they are not hungry and looking for food. They really are just great big cats, perfectly content to lie in the sun and observe what’s going on around them or, with most of them, just sleep the afternoon away.

We also were very lucky with many other animals as well, and Flat Stanley had a good introduction to wildebeests (which I don’t think we have in America), hippos, the African buffalo, and all sorts of other animals and birds, including topi, gazelle, eland, and the ostrich and the kori busturd. There are plenty of zebras, great herds of them, and they make a pretty impressive picture when seen from a distance. The zebras, too, don’t seem to mind when they are close to the track and a van or 4X4 comes by and stops so the visitors can have a better look. 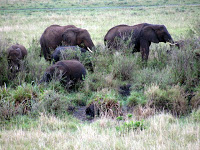 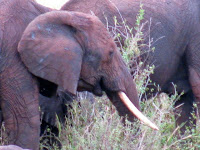 At Masai Mara we got to see plenty of elephants which pleased me and, I’m happy to say, pleased Andrew and Charles and Flat Stanley as well. The African bush elephant is definitely my favorite animal now, and there’s just something about their grace and their huge size that intrigues me. They are very social animals and it is always interesting to watch them moving about in groups and try to figure out what the relationships are. The bulls are often off by themselves, but not always, and as friends and I found out when we was on the migration safari, bulls can be extremely possessive parents.

While at Masai Mara, we had the good fortune to have Tomas as our guide. A member of the Maasai community, Tomas had been our guide when Charles and I visited in May, and it was Tomas who arranged for us to visit a Maasai manyatta, the family compound where he and his relatives live. He took Charles and me there on the previous safari, and he agreed to take Andrew and Charles and Flat Stanley and me there this time. It was a pretty exciting trip, and not only did we and Flat Stanley get a chance to go inside a Maasai hut, the men and women of the community danced for us, demonstrating some of the ritual dances that have become almost a trademark for the Maasai.

The men of the Maasai community are easily recognized by the brightly colored toga-like wrap they wear, the shuka (also now one of the cheapest and most popular souvenirs a visitor can bring home from Kenya). They color their hair with henna, giving it sometimes a rust-colored tint, and they wear a great deal of jewelry, both metal and beaded jewelry. They measure their wealth in the number of children they have and, perhaps as important, the number of cows (they don’t use our plural word “cattle”), with a man not being considered wealthy unless he has at least 50 cows. The manyatta is not only the family compound, for at night when the cows are brought in from where they’ve been taken to graze during the day, it becomes their home for the night, shared with the people living there.