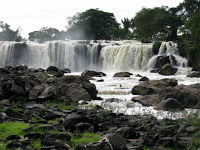 One of Stanley’s best adventures came when he visited Fourteen Falls, near Thika. The town of Thika is the setting for one of his favorite books, The Flame Trees of Thika, by Elspeth Huxley, about a little English girl growing up in Kenya at the beginning of the 20th century.

Stanley went to Thika with Mr. Guy and Mr. Andrew and Charles (their driver and friend) to visit the falls, shown here. Water everywhere, and you can go out in a boat and float across the river below the falls. That was fun, and going out in the boat gave Stanley a good view of the falls.

But the boatride also made Stanley very nervous because he’s so flat that he would have floated away if he fell out of the boat. But he didn’t fall out, and he had fun. 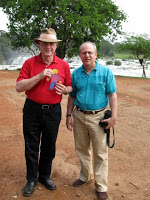 It was an exciting day for Flat Stanley. Guy and Andrew were asked by some of the local boys if they would like to see them (the boys) jump off the falls into the water below. They even offered to take Stanley with them and let him jump shen they jumped, but Mr. Guy wouldn’t allow that. After all, what if the wind caught Stanley up and he floated away? What would Mr. Guy tell Mr. and Mrs. Lambchop?

Still, watching the boys jump was a thrill for Stanley, even if he didn’t get to try it himself.

At Fourteen Falls, Stanley had his picture made with Mr. Guy and Mr. Andrew. He thought a lot about his friends Mal and Claudia and Bayley in Mobile AL and all his other friends and wished they were in Kenya with him. They would all be having a lot of fun together.