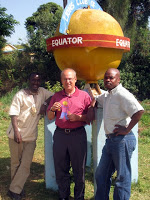 Finding yourself at the Equator certainly seems an appropriate way to wrap up a safari, so here are three of us, Mr. Geoffrey, Mr. Andrew, and Mr. Charles, basking in the equatorial sun with Stanley somewhere around Eldorat in Western Kenya, on our way back to Nairobi.

After three weeks together, it’s time to say good-by to our terrific adventures in Kenya (and our brief venture into Tasmania). We’ve seen more than we can possibly share, but we’re going to do our best, both with these stories about Stanley’s adventures and, coming up, photos and perhaps a few more comments about some of the places we visited and the animals we saw that weren’t included here. Mostly, though, what comes next will be just the pictures, for Africa is so beautiful and the wildlife and the views so spectacular that we can’t stop with just what’s been presented about Stanley’s safari.

For folks who were not with us when we started these posts, here’s the Flat Stanley connection, as described on the back of the book about his adventures (Flat Stanley: His Original Adventure, by Jeff Brown, published by HarperCollinsChildress, 1964): “Flat Stanley is an ordinary boy. At least he was, until the night his bulletin board fell off the wall and flattened him. All of a sudden, Stanley can slide under doors, mail himself across the country in an envelope, and fly like a kite!”
Mr. Guy and Mr. Andrew brought Stanley to Africa because Cindy Hill, a good friend in Los Altos, California, mailed him to them. When Stanley arrived at the St. Clair/Berner house in New York, he politely asked to come to Kenya, as his friend JT in Mrs. Nix’s Class at Alpine Elementary School in Longmont, Colorado would be very happy if Stanley could visit Kenya and go on safari. So we hope these posts and photos will be useful for Mrs. Nix’s class and her students. We all had fun, and we’re very grateful to Cindy for asking us to bring Stanley along with us. He was a great travelling companion, and we all learned a lot from him, and from each other.
All the Stanley photos are online at the Flat Stanley in Kenya album (including quite a few that we couldn’t get into the blog posts) and as we sign off from this adventure, here are some more photos, just to wrap things up: 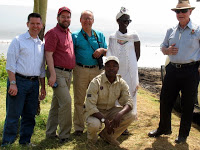