Flat Stanley had some wonderful times in Africa, but it seems the Giraffe Center (described last time) and the Elephant Orphanage made him the happiest. Yet describing the elephant orphanage is a real challenge because I become very emotional thinking about how the elephants were orphaned, and what wonderful work the David Sheldrick Wildlife Trust is doing to save them and then to rehabilitate them to prepare them for their return to the wild.

So the story of the orphanage is a touching one, and the idea of rescuing these babies after they have lost their mothers is certainly an idea that appeals to everyone. Whether the mothers have died in childbirth, in an accident, or – hard to believe in this day and age when poaching is so strictly outlawed in Kenya – when the mother has been killed by poachers for her tusks, learning about these orphaned babies and their care tugs at the heartstrings. Many parents bring children to see the babies, and when the attendant providing the commentary is as knowledgeable and well-versed as the gentleman who spoke to us on our visit, everyone goes away with a new understanding about the everyday life of the babies as they prepare to cope with going back into the wild. 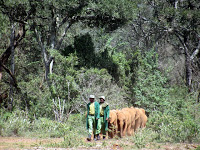 There’s a certain sense of ceremony to visiting the Elephant Orphanage, starting with the entrance of the little ones, as shown in the photo above. The “procession of the orphans” (it might be called) begins with the babies and the well-trained attendants coming in from the forest quite a distance away, and of course that only enhances the anticipation (and, yes, Stanley was as excited as everyone else, jumping up and down as the elephants got closer to those of us who were watching as they came into the enclosure to be fed). 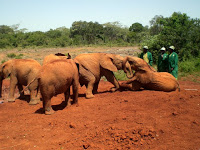 It was a great privilege to introduce Stanley to the Elephant Orphanage. I’ve visited several times, and written about the orphanage twice (here and here). Each time I’ve visited I’ve become a more attached to the animals, and I am really impressed with the success of the work that is being accomplished. On this occasion, I was pleased to introduce Mr. Andrew, Mr. Richard, and Mr. John to the orphanage as well, since I knew they would be thrilled to see the elephants and, of course, be amused to see the youngsters enjoying themselves and showing off for the visitors (as in this wresting match – all in fun – between two of the “kids”).