I’m not sure getting lost in Kakamega Forest is quite what Stanley had in mind when he asked if he could come along on our safari, but that’s what happened.

But I’m getting ahead of myself.

Kakamega Forest is the last remaining vestige of a tropical forest in Kenya, a beautiful 45-sq-km (17-sq-mile)  rainforest full of interesting animals, an ancient tree (the giant Elgon olive tree), and known for its snakes and other crawly things. There is also a beautiful waterfall, and a very well maintained lookout at the top of a steep incline. I had visited Kakamega with Mr. Charles and his children earlier in the year (you can read about that excursion here), and as we planned this safari, Mr. Andrew and others of our group wanted to add the rainforest to our itinerary.

So off we went, heading out early one morning to see this magnificent natural wonder. Here’s Stanley and Mr. Guy standing on the road at the entrance to the forest. You can see how dense it is, and this road is the only way for vehicles to come in and out of the forest. 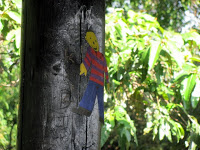 One of the nicest things about Kakamega Forest is the lookout tower, and here are a couple of photos of Stanley enjoying the views from the lookout (there are others at the Flat Stanley in Kenya album). The view is pretty special. You can see for off in the distance for 35 miles or so, and on my previous visit, we had climbed up to the tower by foot. This time the ranger at the gate suggested we drive a little farther along around the mountain and then climb up the wall of the summit.

OK. That idea made sense at the time, but as we went up, the climb was much steeper than we had expected, and there was a great deal of loose stone and we kept falling back (and sometimes falling down). But we made it and, as the photos show, really enjoyed being at the top of the summit with Stanley (and he had a really good time climbing the posts of the lookout tower, even though it was a little risky for him up there). Here’s a photo of Mr. Andrew and Mr. Geoffrey and Mr. Charles with Stanley.

But we had to keep moving so when it came time to go back, since the climb had been so tough, we decided to have Mr. Charles go back for the van and meet us at the bottom of the footpath.

So off Charles went, and we could see him drive away. Then we started down the footpath, getting wonderful views in the forest, and taking lots of photos of the ancient olive tree (and of just about anything else we ran across).

But wait! No one told us that the footpath had several other footpaths going off from it, in other directions. So while we thought we were walking down the main footpath to meet Mr. Charles on the road, we were in fact going off in a different direction. And we kept remembering all the talk about the snakes and the Gabon Vipers (and we could hear the Colobus monkeys in the trees above us). Then someone remembered what the ranger had said, that he didn’t think there were leopards any more in the Kakamega. Uh-oh….

So now we were starting to get nervous, and the mobile ‘phones were not getting any service and we couldn’t reach Charles. But Ms. Nerisa and Mr. Geoffrey are Kenyans, and they are not particularly frightened in situations like this (we won’t speak about Mr. Guy and Mr. Andrew and Stanley), so we just kept walking. Finally, realizing we were at the bottom of the hill, we kept going and finally came upon the road. Now we could reach Charles by telephone and, not surprisingly (it’s just the way he is), Charles was able to figure out where we were and we were safe. No question about it: we were very, very happy to see him and the van!