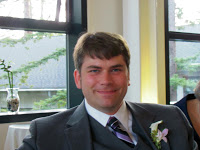 Families and the interactions within families have long been fascinating to me. Human relationships are so varied and so full of all those “ups-and-downs” we hear about in all the sermons, and yet as we go through life, we find the connections of family – whether genetically connected or not – bring us much pleasure and give us much to be thankful for.

Such ruminations are appropriate, I suppose, for someone who has traveled far – even building the visit into a work contract six months in advance – to participate in what can only be called a “family” event. In this case, the “family” is a marvelously extended family, going back some thirty or more years and bringing together people who – while not blood-related – think of themselves as very close, and think of each other often. 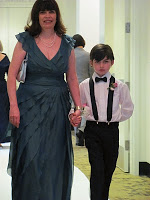 James Lafferty (above) and Guy St. Clair have known one another since James was about 11 months old. Our families were close, and over the years the bond between James and Guy has continued to flourish, as well as that between Guy and James’s sister (Helen Lafferty Knudson) and with James’s mother, Dellie Flanagan Johnson (shown here with James’s son Julian leading the wedding procession). We’ve now been one big “family” for a long time, and we’ve delighted in the relationship, very comfortable with it. It’s right up there alongside those other “families” we have, Guy with his sons and siblings and several family-like relationships with other groups, and James with his, and all stretching out over many years. 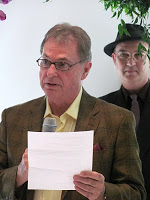 So of course when James is getting married, his friend Guy is going to be at the wedding. And mightily honored to be asked to be part of the wedding, to do one of the readings. Could James and Anne have selected more beautiful readings than these two passages from Le Grande Meaulnes by Alain Fournier:

“Now and then my foot encounters a patch of fine sand. And in the silence I hear a bird – I imagine it to be a nightingale, but how can it be if they only sing at night? – a bird which repeats the same phrase over and over: the voice of the morning, a greeting  that comes down through the leaves, a charming invitation to roam through the alders. Invisible, persistent, it accompanies me on my promenade under a roof of foliage.”       and

“For the first time I too am on the path of adventure. For once it is not for shells left stranded by the tide that I am prospecting, with Monsieur Seurel close at hand, nor for specimens of orchis unknown to the schoolmaster; nor even, as so often in old Martin’s field, for the deep but dried up spring protected by a grating and so overgrown with weeds that on each visit it took longer to find… I am looking for something still more mysterious: for the path you read about in books, the old lane choked with undergrowth whose entrance the weary prince could not discover. You’ll only come upon it at some lost moment in the morning when you’ve long since forgotten that it will soon be eleven or twelve… Then, as you are awkwardly brushing aside a tangle of branches, your arms at the same time trying to protect your face, you suddenly catch a glimpse of a dark tunnel of green at the far end of which there is a tiny aperture of light.”

So it was a wonderful occasion, this journey that Andrew and I made from New York to Santa Cruz in March (additional photos are captured here). As I mentioned, because of this important family event I had been able to negotiate time away from the current project in Nairobi, although I did combine the travel with project work in Brussels, Geneva, New York, and – following the California visit – Rio de Janeiro.

We had fun getting to know Anne Hopkins – James’s beautiful bride better than we had known her before. We had met on several occasions and we knew and loved Anne long before the wedding, but to be with her and her family on this important occasion was a splendid treat for Andrew and me. And true to form, the lovely, funny vivacious woman was so composed that she was even able (as shown here) to maintain her composure as Mr. Guy read. I wonder if I would have been so composed and comfortable in her situation! 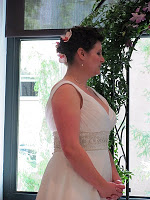 The reception pleased us all. The music, the food, the dancing, the toasts, all prepared with great attention and great specificity to this particular occasion and this special couple. And Anne and James themselves did their part, and the results were so evident of much special thought and careful planning. Far too many special touches to try to list but those of us who cherish and delight in our books cannot resist recording our pleasure at the selections of books arranged amongst the table decorations. Every table had two or three wonderful titles, each of which – with books ranging from the Harvard Classics to children’s books that had been Anne’s and James’s favorites – had special meaning for Anne and James and for many of the guests.

And what a great party it was! As Andrew and I had come to know Anne’s children as well as James’s Julian, we enjoyed being the “older guys” with the young ones and, yes, there was plenty of romping about and laughing and chasing one another. We even achieved considerable success (as I had done with Charles’s son in Kenya) in giving the boys full rein with the camera and they found themselves continually entertained both in the hotel where all the guests were staying and at the reception.

And the “family” theme? No question about it, weddings are a splendid opportunity to become a big, loving family, even for people who are not related by blood. Some would perhaps call it simply “friendship” or “bonding” or “sharing” but I think there’s more to it than that, something that perhaps I cannot even articulate as clearly as I want to. As Andrew and I got to know many of the many people who had come together for Anne and James, it became clear that we were, indeed, one big family. We were all loving the many conversations, interactions, joking, story-telling, and even professional networking (yes, some of us even exchanged contact information, since it seemed an appropriate thing to do as we shared stories about working and living in different parts of the world).  Memories were evoked – happy, sad, life-changing, and even (sometimes) silly memories, all heightening our pleasure and our delight in Anne and James and the fact that they had found one another.

We are so grateful to James and Anne for bringing us all together and into their lives for this special time. Happy memories that will be with us forever.