Thursday was our day to visit the splendid Museum of Anthropology and we had ourselves a wonderful visit. As anyone who has been to Vancouver knows, this is one of North America’s most beautiful cities, and we are definitely enjoying the harbor area (where our hotel is located) and watching the great cruise ships come in and out. We had discovered the ease of moving about in that part of the city, so the idea of riding out to the campus of the University of British Columbia, where the museum is situated, was anticipated with pleasure.

So off we went – with friends Dale and Debi Stanley – to visit the museum. Andrew and I knew nothing about it, and even less about the history and artifacts of the Pacific Northwest peoples. We had of course (being New Yorkers) seen the very fine exhibitions at the American Museum of Natural History but for some reason neither of us had ever paid much particular attention to what was on display there. That won’t be the case in the future. We had no idea what to expect when we visited the Museum of Anthropology, and were we ever surprised! Both of us, and Dale and Debi too, were a little overwhelmed by the quality of the exhibitions and the stunningly beautiful setting at the Museum of Anthropology.

In my opinion – and I said so when I wrote to several friends from Vancouver – UBC’s Museum of Anthropology has to be one of the best museums I’ve ever visited. For one thing, since I knew so little about the First Nations peoples of the Pacific Northwest First Nations, I came away with a wealth of new knowledge about this fantastic history, and I’m sure I’ll be reading about this subject for a long time. And when I visited the MOA (we arrived in time to join a guided tour, with a very knowledgeable docent) I had my eyes opened to beautiful carved wooden structures that I don’t think I ever knew existed (or at least paid much attention to). I learned about how the canoes are made, about the different meanings of so many of the carvings on the totem poles (and which were used as house posts, with several different purposes), the carved boxes from a single block of wood. All absolutely fascinating.

As noted in the university’s catalogues, the museum is affiliated with the UBC Department of Anthropology and it is world-renowned for its collections, research, teaching, public programs, and community connections. We were most impressed with the impressive First Nations of British Columbia collection, but that is not to say we weren’t equally impressed with the many other artifacts on display – through a partnership between the museum and the Laboratory of Archaeology in the joint Canadian Foundation for Innovation (CFI). 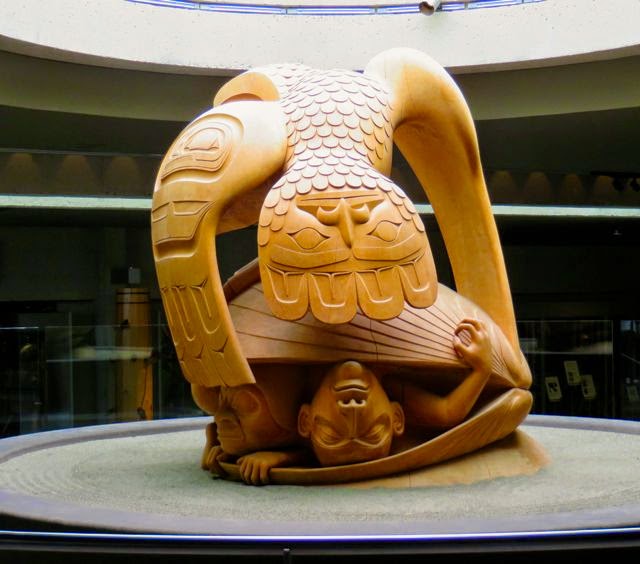 Of special interest at the museum is a sort of “centerpiece” work, sculpture commissioned by the museum and displayed in a special glass-roofed rotunda (hence the not-so-good quality of the photograph). Bill Reid was an amazing Haida artist, and this work – The Raven and the First Men – is a fabulous depiction of the Haida myth of the Raven discovering mankind in a giant clamshell. Carved from a laminated block of yellow cedar, the spectacular wooden piece catches the viewer’s attention and frankly, for me, I found I was having great difficulty pulling myself away. A large collection of other Bill Reid works are on display at MOA, including lovely studies and other versions of this splendid work. Truly amazing to see.

At MOA, there is an amazing, vast collection of study materials on display – in glass cases, sliding drawers, and huge cabinets, and all accessible (at least in the public areas) to visitors in the MOA Centre for Cultural Research and the Multiversity Galleries, with more than 10,000 objects from around the world. And for those of us specially interested in knowledge development and knowledge sharing (and in this case in knowledge utilization as well, in the development and sharing of this content for teaching and scholarship), we found the MOACAT digital catalog system – available throughout the galleries – a splendid demonstration of the MOA’s focus on combining the museum experience with current scholarship. Well done.

Random photos (not yet captioned) of our visit to the Museum of Anthropology at the University of British Columbia can be seen here.