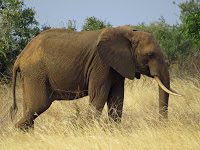 For those of us concerned about the future of the elephants, there is good news from the United States.

Acting in response to an Executive Order from U.S. President Barack Obama, the U.S. Fish and Wildlife Service announced the destruction of six tons of illegal elephant ivory. The news release announcing this action was publishing on November 14.

I urge you to take a look at U.S. Destroys Confiscated Ivory Stockpile, Sends Message that Wildlife Trafficking, Elephant Poaching Must be Crushed: Following President’s Executive Order, U.S. Steps Up International Efforts to Fight Wildlife Trafficking.The release describes in detail the efforts of the U.S. Fish and Wildlife Service in putting forward an American statement opposing this heinous crime. In the report, the service notes that

Six tons of illegal elephant ivory confiscated by U.S.
Fish and Wildlife Service law enforcement officers were loaded into an
industrial-scale rock crusher and pulverized today at the Rocky Mountain
Arsenal National Wildlife Refuge outside Denver, Colo. Officials from
the departments of Justice and State joined Service Director Dan Ashe
and leading worldwide conservationists in calling for global action to
combat wildlife trafficking and stop the slaughter of elephants and
other species. 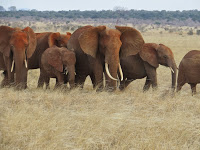 This is excellent news indeed, and I send along all high commendations and the gratitude of this citizen for President Obama and his good will in signing the Executive Order. According to reports, the destruction of the ivory follows an announcement by the President establishing the first ever council to advise the government on ways to improve coordination and implementation of domestic and international efforts to fight poaching and illegal wildlife trafficking. The creation of the council stemmed directly from President Obama’s Executive Order directing U.S. government agencies to ramp up efforts to stamp out the illegal wildlife trade.
As readers know (see my posts from March and April of this year), the poaching efforts seem to have reached some sort of awful heights in late 2012 and earlier this year (with elephant deaths reported at approximately 30,000 each year), and I was fortunate to be able to work with the Wildlife Conservation Society in helping support WCS efforts focusing on anti-poaching and the study of this magnificent species. Then, over the summer, friends and I were thrilled to spend time in the wild in Kenya, conducting our own observations (which I keep promising to write about – just haven’t gotten around to it yet – but a few tempting photographs can be seen with this post and here). I’m very grateful to keen-eyed Jerry Jourdan, who traveled with me on our Kenyan safari during the summer, for spotting the report about the ivory destruction event in The Outdoor Wire last Friday. 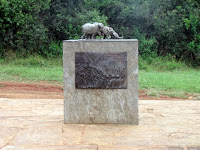 And the event, naturally enough, puts me in mind of the very touching (and beautiful) memorial we saw in the Nairobi National Park, placed there by President Daniel arap Moi back in 1989.

I had first seen the memorial back in my earlier visits to the park, and it was my good friend and driver Charles Masese, noting my particular affection and interests in the elephant, who took me specially to the Nairobi National Park to see the memorial. Back in the 1980s, Kenya led the campaign against the slaughter of the elephants for their ivory, and it was there – in the Nairobi National Park – that Kenya destroyed its own captured contraband ivory. The massive pile of ivory ash still stands near the memorial, evoking very strong feelings and horror among all visitors, to think that human beings could be so cruel and so greedy as to undertake such massive slaughter of these beautiful and majestic creatures.

Thank you to the U.S. Fish and Wildlife Service and to our President for taking this action. The destruction of the captured ivory is very encouraging. In my opinion we as a nation are now taking a strong first step in raising awareness about the horrors of ivory poaching by evil and ignorant people. We can only hope this action changes some minds.