Much of what we hear about the elephants is not good news. The dwindling numbers (in just about all species), the poaching, the agreements – sometimes observed and sometimes not – about hunting. Then there was the report in early July of the mysterious (and not poaching-related) deaths of some 356 elephants in Botswana.

Let’s change course today. I’m a few days behind because I didn’t remember that Wednesday was World Elephant Day, the annual day for celebrating the elephant. My Tennessee cousin, who is as much an elephant lover as I am, wrote to remind me (she had forgotten, too, and just remembered at the last minute).

So to make up for my lapse, I thought I would share again an old story that might help us take our minds off some of what’s going on in our global society these days. We need to be lifted up (at least I do), and when I think about elephants and the magnificent creatures that they are, I’m happy for them. And I’m happy we have them. Despite our fears for them, I still love them, and I love the fact that we still have them.

As for my personal perspective about the elephant, I was incredibly lucky to be able to live in Kenya for a couple of years. While I was there, I was able to learn about and to embrace (not literally of course) the elephant. In fact – and it’s the purpose of this post – I hope I can make life a little brighter for some of my readers by retelling a story that made me very happy at the time. And it still does, whenever I think about it. If it’s against the rules of the blogosphere to re-tell a story, I apologize. This one makes me happy and I hope it will make you happy too.

Most of my friends know that I fell in love with the elephant when I lived in Kenya, and I’m never shy about telling elephant stories when I’m asked. Several years ago, while on safari with Andrew and some friends, we did a lot of things. And I’m not shy about admitting that my focus was – and is – on the elephant. My friend Jerry, who was on safari with us that year, is a serious bird watcher. So (I found out) is Charles, my driver when I lived there and even now one of my two best friends from my Kenya days. But I never knew about his skill in spotting birds until Jerry was with us.

So their focus was birds, and Charles and Jerry had a high old time looking at the birds, not surprisingly since Kenya is reputed to be the best country in all of Africa for bird-watching. Andrew went in for looking at and learning about the zebras. As for me, I liked all the animals and, well, yes, even the birds (for they are exceptionally beautiful to look at), but for me, it was the elephants that grabbed my attention.

And because of these interests, we all had our special favorite-animal nicknames. I don’t remember what we called Jerry, but Andrew was (and still is) known among his African friends as Bwana Punda Milia (“Mr. Zebra” in Kiswahili) for his interest in the zebra as his favorite African animal. Charles is Bwana Simba (lion), for the same reason. And, no surprise here, I’m called Bwana Tembo (elephant), after a briefly – but sweetly – mentioned character in Isak Denison’s Out of Africa.

So it goes. And as you can imagine, there are lots of elephant (bird) (zebra) (lion) stories, and I would be writing too much if I tried to tell them all here. And other friends on different safaris all have their own stories – and favorite animals – so while there could probably be more African animal stories, today I’m happy to limit myself this one.

Among our more exciting adventures was our journey into Tsavo East, one of the largest of the many national parks in Kenya and one of two or three most hospitable for the elephant. As a result, Tsavo East is managed by Kenya’s National Wildlife Service to ensure that visitors get to spend as much time as they like with the animals, and especially with elephants (spend time, that is, from a distance – these are animals in the wild).

As it was not too long after the birthing season when we were at Tsavo East, there were plenty of large elephant families wandering about, both in the forest and in the open savannah.

Our lodge, the Voi Safari Lodge, was beautifully positioned high on a hill, and we could look down on the savannah and see the elephants. We were amazed at the spectacle, both from our room in the lodge and from the dining room. On arrival in our room, about noon, I stepped out on the balcony and looked down and couldn’t believe the number of elephants. The savannah was huge, with forest very far away (several miles across from us), and elephants were everywhere, most of them keeping to a wide path going across one section of the savannah just below us, but plenty of them wandering about in different other areas as well. So just for fun, I started counting. I quit when I got to 140! Amazing! 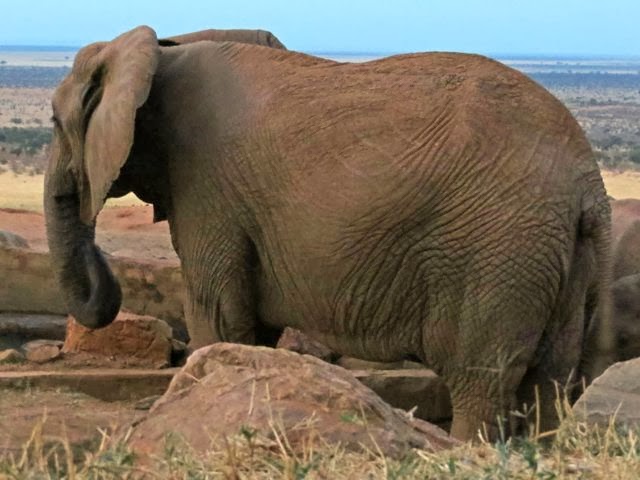 Being on such a high spot, overlooking so much space, the developers of the lodge had created a path (pretty steep, but with secure railings) and guests can walk down toward the elephant water hole. About half-way down, there’s a sign posted, urging silence (in several languages) since the wild animals would be frightened from too much human noise. Next to the sign you enter through a gate in a concrete wall and proceed down a solid stairwell, well carpeted (again for the quiet). You enter a bunker, standing below ground with openings at eye level for viewing the animals, exactly at the level of the elephants’ water hole.

From within the bunker, we could observe the elephants more closely than I ever could have imagined possible. We could sense how they were communicating with one other – or with the group. Sometimes one of them would roughly push this one or that one out of the way, and once in a while there would be a typical “elephant” call, as the animals vied with one another for attention or had this or that message to communicate, or simply wanted to get closer to the edge of the water hole (and sometimes stepping down into it, not at all reluctant to do so).

There was also a considerable amount of very gentle touching and a sort of soft nudging and rubbing between some of the elephants, of all ages and sizes, and among groups of them. Oftentimes it would be clear that there was a big bull or a matriarch in charge, but most of the time all the of interactions between the animals were very soft and sweet, demonstrating to us that they clearly respect one another. 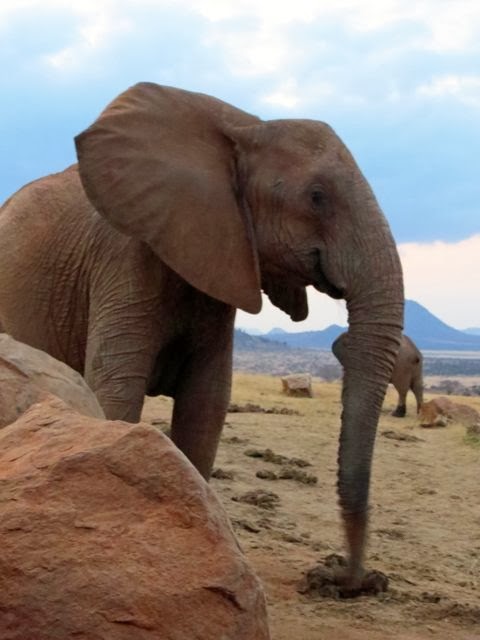 After we had watched a while, about an hour, we sensed that some of the elephants were moving away from the water hole, not surprising since it was getting late, nearing sunset, and we kind of suspected that the elephants would move off after dark. We were very quiet in the bunker, and while we could see out very well, we had no idea of how well the elephants could see inside the dark bunker (it wasn’t lit, and elephants aren’t known to have very good eyesight). On the other hand, every once in a while one of the elephants would walk along in front of us, and we thought we noticed a glance or two in our direction but we were pretty sure they could not see us.

Or could they? As it began to get later, we noticed a great huge dark grey lady elephant come along, around the water hole, waddling over toward our side of the water hole, where we were in the bunker.

Oh, she was huge. And she was old. We could tell because of the way she moved, the way she had no tusks (I had been told that sometimes really old elephants lose their tusks, just like old humans sometimes lose their teeth), and the way her breasts hung down loosely. We figured she must be really old, possibly as old as 70 or 75 years of age.

And this was what was so amazing. The old-lady elephant ambled on around the water hole, coming over to our side (the bunker side) from our left. Andrew was snapping photos like crazy. I was leaning on the frame of the opening, resting my chin on my hands, my elbows on the frame. As she moved forward – I’m not making this up – she walked right up in our direction. She got closer, looked through the opening right at me, right into my eyes, and she slowed down. She was less than ten feet away, and she stopped walking altogether. And then she leaned over a little, resting against the big “scratching rock” just outside the opening where we were standing. 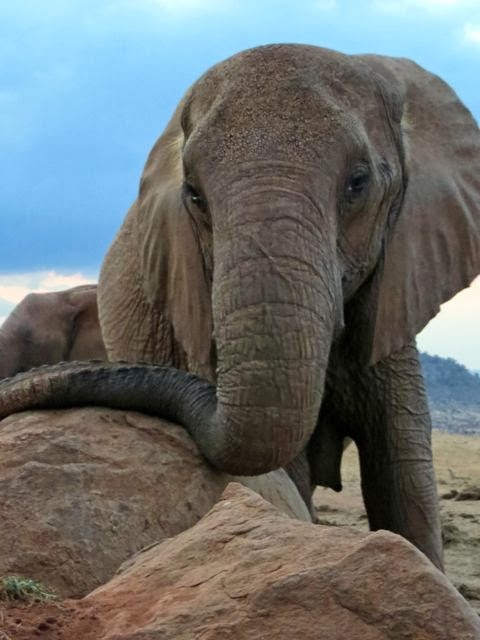 And she would not stop looking at me. After a minute or two, she raised her trunk and rested it on the rock and continued looking at me. (And continued, and continued…) I looked back, not moving a muscle, not saying anything. Just looking into her eyes as she was looking into mine. We were obviously caught up in some sort of communication with each other, some sort of bonding. I found it hard to believe what I was experiencing.

And so did Andrew, who was so moved by watching her and me that he had to move away, over to the other side of the bunker. And when he came back and stood beside me, the incredible bonding continued, for what we later estimated was another 25 minutes or so.

But we had to go. Darkness had started to fall, and despite the fact that she continued to look at me, I knew I had to start back up to the lodge.

So I said something innocuous to her, speaking very quietly. I thanked her for coming to find me, said a few more soft phrases, and then I started toward the stairs. I turned around to look, for one last look, and she was still there, watching through the opening, watching something, feeling something.

Other photos of the elephants can be seen at: 2013-07-18-Tsavo-East-National. Most of these were taken by Andrew, as I was too busy communing with the elephants.

Also in observance of World Elephant Day, there’s a lovely short video from the Oregon Zoo of elephants playing in the water. It’s at https://bit.ly/3kOYhwb. [Thanks to my pal John Hovell for sending this along to me – He knows about me and my love of elephants.]