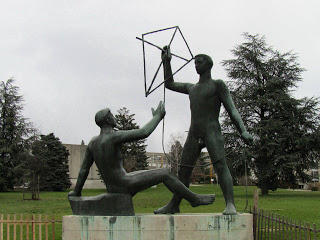 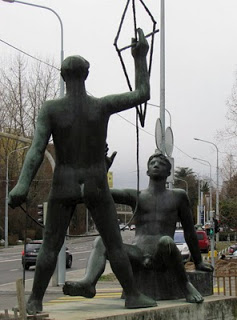 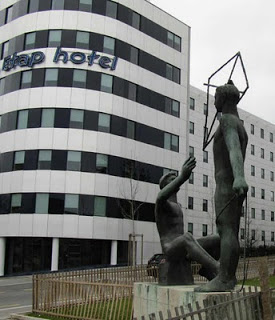 A blog is, I suppose, something of a diary – and particularly a travel diary
for people who move about a lot – when one does interesting things.

But sometimes we get caught up in the mundane and don’t get to post what or
when we want to post, which I seem to recall is an on-going issue for people
who like to keep diaries. Since we don’t live in the 18th century anymore,
it’s hard to fit it all in, and keeping a diary I expect is ‘way down the
list for most 20th-century folks!

So it’s been a while since I left Geneva, and truth to tell, there wasn’t
much to tell. Work went well, and I got done what I went to Geneva to do.

The hotel (shown here) was pretty ordinary but it worked. I didn’t have to
sleep in the streets!

But there wasn’t time to visit the sites, and I’m sorry not to have had a
tour of the Palais des Nations and the other U.N. buildings in Geneva.
Perhaps there will be another assignment to Geneva one of these days.

Saw only one work of art, oddly enough directly outside my hotel window. But
very special, and well worth the time I was able to spend looking at it.

Could find out nothing about this piece of sculpture, and I somehow had the
sense that it was in a temporary location, since so much construction is
going on in the area, especially behind a huge shopping mall just across the
road. And the setting seems very strange for such an important work of art.

Still, I found it kind of fascinating, and I’m intrigued that the sculptor
gave the kiters – whom most of us would think of as boys and not as men –
the forms of adult men. An interesting little intellectual excursion into an
artist’s way of thinking, I suppose. Very nice.