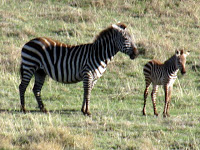 [Despite the confusing title, I’m not back in Africa. Just continuing to posts stories and photos that are still with me, stuff I want to share.]

Just can’t seem to let go of the Africa memories, and as I look back at some of the pleasures of the last safari, my thoughts keep returning to the idea of going back to my beloved Kenya. European friends are thinking about joining Andrew and me for a migration safari in July 2012, so I had better get all the Ngorongoro memories locked in place, as I probably won’t be returning to Tanzania again.

The descent on to the crater floor was an exceptional experience. As I think I’ve mentioned, staying at the Sopa Lodge has its own special charms, one of which is a separate roadway down from the rim of the crater, eliminating the need to drive around the rim to get to one of the other descending roadways. And the great joy of the descent is the amazing collection of views of the crater, and, as you get closer, the amazing collection of animals, seemingly just all over the place. And among the first animals we saw were the zebras. There were so many of them that I began to think we were on another migration trip

But all the animals we’ve grown accustomed to seeing in other conservation areas are not present in the Ngorongoro Crater. For some reason there are no giraffes in there, and apparently no one’s ever been able to figure out why. There is – not surprisingly – a great deal of speculation, and the most popular theory seems to be that the steep climb up and down the crater walls is too difficult for the giraffes on their spindly legs. Perhaps. But that wouldn’t explain why there are no impala, which can be found in just about all the other parks and conservation areas we visited.

We loved seeing the warthogs, those funny-looking, shy animals that can really move fast when they sense there are humans about. On the other hand, at the Bomas of Kenya tourist attraction near Nairobi, we were equally surprised to see some of these odd animals mingling around amongst all the visitors and staff, apparently not at all uncomfortable around people. So I can’t make any definitive statements about warthogs and their connections with human beings but I do know that on a game drive – in any of the places I visited – when our vehicle got even in sight, the warthogs took off running!

Many lions are spread out all over the crater floor, and spotted hyena seem to be everywhere, as our photos show (at  Ngorongoro Crater (3) – The Animals). We were even able to catch sight of some of the hyenas enjoying the last bites of a kill (they don’t kill any prey themselves, I understand – just come in and take over after the successful predators have sated their hunger and moved away). And here, for the first time, we were able to see cheetah, and we were very impressed with one fellow who was just sitting there looking around, enjoying the beauty of the place like we were (Okay. Perhaps he was looking for where he might find his supper a few hours later).

There were a number of hippos moving about on the crater floor, and one we spotted was pretty impressive. We were able to drive close enough to get to observe him and his habits pretty well, and he paid no attention to us in our van. He just kept feeding on the grass, and every once in a while he would walk about a bit, so  all in all our experiences with the animals on our game drive were successful, and we came away feeling good about what we had been able to see.