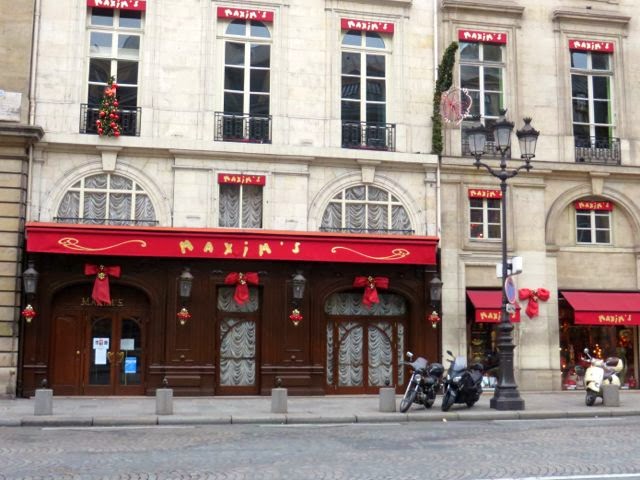 In a recent post, I commented that I would be writing about subjects that are of particular interest to me (well of course, Guy – isn’t that what a personal blog is all about?). I noted that among these special interests was l’art nouveau, the great design style that began in the so-called belle epoch and quickly spread throughout most of the western world.

Ever since I first learned about art nouveau, I’ve loved all the sinuous botanical lines, the curved wood, the often-overly elaborate fabric designs and draperies for clothing styles, and, well, just about anything that evoked that period when – despite all the bad things that happened in the world – there was (among those who had money, as in all periods of history) a great deal of beauty. L’art nouveau was often embraced to express that beauty. 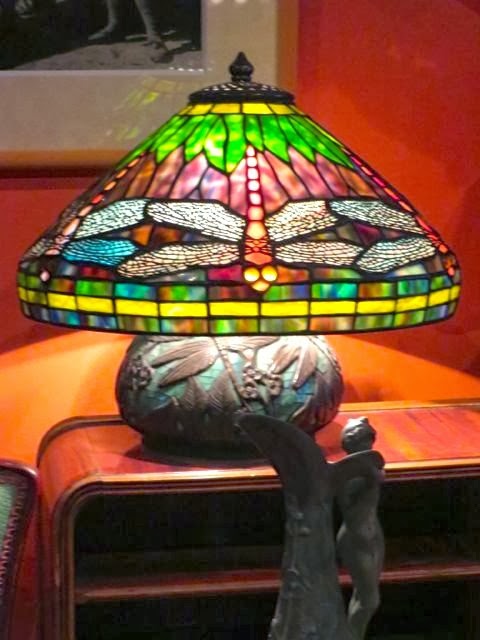 I once did a little study of my own, just to learn what I could about art nouveau. I had come to love the idea that one design “type” (we might say) had so caught the attention of society that it showed up in just about everything. Not just furniture and objets d’art as I noted above, but in architecture, interior design, commercial designs, printing and book design, construction elements (especially Métro entrances and apartment-house balcony railings and other building ornamentation in Paris and, of course, in many other cities as well), and just about everything else. It was, it seems to me, a great attempt to make just about everything look beautiful.

One of our great goals, with our recent visit to Paris, was to dive in and, once again, immerse ourselves (well, immerse Mr. Guy) in the Paris version of l’art nouveau. It’s always a great adventure in Paris, and while I’ve had quite a few opportunities to explore this lovely style in that splendid city, this trip was particularly planned for seeing as much art nouveau as possible. And we did see a lot, and, yes, I’ll probably write about some of the other art nouveau things I saw in later posts. For now, let’s just focus on one special treat. It was a visit to Pierre Cardin’s Art Nouveau Museum, and it came as a complete surprise.

Our visit came about in a sweet coincidence. When I mentioned my interest in art nouveau to the one of the staff I befriended at our hotel, she immediately asked if I knew about the museum (it happens to be just around the corner from the hotel where we were staying). I did not, so she gave us all kinds of information and we were able to make an appointment for a private visit (well, private only in the sense that we were in Paris in late November, with few tourists, so no one else had signed up for the visit – I presume anyone can call and reserve to visit).

As it turns out, I know little about Pierre Cardin and his personal life. Or his tastes. But apparently he has been fascinated with art nouveau, as I have been, since he was a young man. He began collecting a long time ago (I don’t collect, except for a few scattered items that I either inherited or for one reason or another were made available to me). 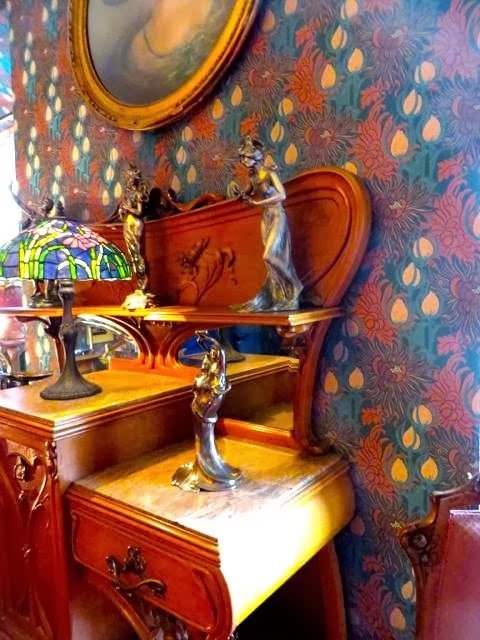 With his success in his career, Cardin was able to branch out in a number of different areas, and it’s no surprise that when Maxim’s – the great (and much beloved) Paris restaurant – was for sale, Cardin bought it. That was in 1981, and in the years since, he has continued Maxim’s great tradition as the place to go for an evening’s entertainment.

It didn’t start out as much. The story goes that the business was launched in May 1893 as a sort of meeting house (probably along the lines the coffee houses in different parts of Europe that had been around since the late-17th century or so and, later, in North America). The owner was a former waiter named Maxime Gaillard, who was given to encouraging beautiful ladies to sit in the place to add to its charm. A little later, Eugene Cornuché – the next owner – brought in the art nouveau decorations, all the rage at the time (as can still be seen all over Paris) and encouraged even more beautiful women to come in and “decorate” his establishment. So the stage was set, and Maxim’s became the splendid place to be and be seen with the beautiful women of the day.

Cardin did more. When he purchased Maxim’s, of course the famous restaurant continued – and does today – but he also used the building to house his collection of art nouveau artifacts, furniture, and design, combining the art nouveau items with other materials of particular and personal interest, including a considerable number of pieces relating to Colette and her writings and life. It’s a fascinating place, and we highly recommend it for a visit, if l’art nouveau is of interest.

We were charmed. It’s hard to describe all the beautiful things to see in the collection. There are several rooms – on several different floors – and the idea seems to be to arrange the rooms as they looked when one of the famous courtesans of those Paris days lived there (think Dumas’ La Dame aux camélias or even Verdi’s La Traviata). The grandeur is there, and some of the pieces on display are as good as any seen in any museum anywhere. 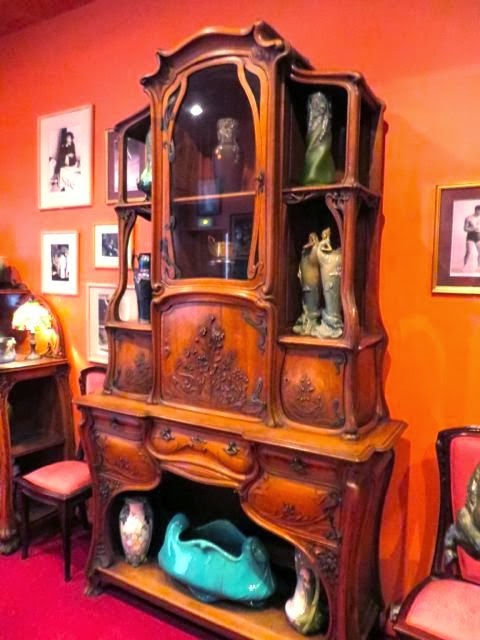 Part of the charm, for us, was our luck in our guide for the visit. She was Véronique Fourcaud-Hélène, an actress and singer and – I gather from the similarity of the names – connected in some way with the Art Nouveau Museum Director and art historian Pierre-André Hélène. While we’re sorry we didn’t have a chance to meet Pierre-André (I’ve viewed his introductory film which is very good – you can see it here), we were delighted to spend time with Véronique, and she went out of her way to make us welcome and to provide us with so much information about the collection and about the overall Maxim’s environment. A distant cousin of painter Toulouse-Lautrec, Véronique performs at Maxim’s, both in an original play by Pierre-André, connecting with Cardin’s interest in Colette, I gather, and in musical evenings presented at Maxim’s. Indeed, in one section of earlier promotion film clips at the Maxim’s site, Véronique is referred to as “The Lady of Maxim’s” and her musical performance (“The 1900 Spectacle”) looks like a delight. I’m just sorry we could not attend a performance while we were in Paris.

I’m happy to share some of our photographs (Véronique graciously allowed us to take photographs, “as many as you like”), and you can see them here. You can also access the Maxim’s site itself, especially for the beautiful photographs of the museum and its collections. We did not take photographs of the restaurant as it was not open when we were there and it was too dark (too late in the day) to photograph. Nevertheless, we had a lovely tour of the restaurant rooms, and it provided a very fine conclusion to our tour and our visit with Véronique).