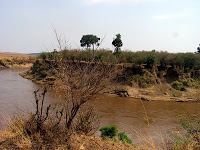 It’s not always a pretty picture, for early in the migration (probably up to within a few days of when we of The  Best Four were on our safari), the predators – the lions, cheetahs, and leopards in the grass and the crocodiles in the river – are a dangerous force, and the attacks on the animals is a gruesome sight to see.

We did not have to experience that, as I’ve noted, since our experience came late enough in the migration that most of the animals were not necessarily prey to their natural enemies. Still – probably by instinct as well as anything else – they were being careful in deciding when to cross.

When we got to the Mara River Gatehouse and completed our negotiations with our guide, we were ready to start out looking for animals getting ready to cross and hopefully – the goal on any migration safari – to see a crossing.

The guide – Barnard – was pretty astute about all this (he’s been doing this for a while) and he had an idea where we might see a crossing, so we heading in that direction. The river was quiet today, and we drove for quite a distance, looking for the animals but not seeing any. Beautiful views, though, and we could see, with the height of some of the cliffs, why the animals had not chosen those spots to cross. And we saw several crocodiles in the sun and that was probably another deterrent. Sadly we were not able to drive close enough to the river bank to get photographs of the crocodiles. That will be the next time.

The photographs we took, though, tell the story of our day. If you take a look at Migration Safari – The Crossing you’ll see that we were both unsuccessful and successful in our wait. As with any of the game drives, we learn to be kind of philosophical (and patient) because any success with our intentions is going to depend on the actions of the animals. We cannot – alas – will them to do what we want them to do.

So taking Barnard’s advice, we drove along looking at the gorgeous scenery until finally we spotted them, all gathered on a bluff – still on our side of the river – and apparently trying to decide whether to come down the hill and come on across to where we we were. And by which spot they would have to pass if they wanted to cross the river near here.

So we waited. And we waited. And we kept waiting. We were there over an hour, and there they were, having a grand old time feasting on the  grass and I suppose having some conversation about whether they wanted to amuse the tourists by coming over and allowing us to see them cross the river.

If that was what they were thinking about, they apparently decided to give us half the pleasure, for suddenly we could see from the dust that they were starting to move, and coming in our direction. We were delighted! We would be able to see them line up and parade past. On they came – my companions estimated there were probably about two thousand of them, or perhaps more – and it was thrilling to see them go down into that dry gully, come back up and form into a line and come on past us. An absolutely splendid spectacle!

Then something stopped them. We don’t know what it was, whether the leader at the front of the line saw something he didn’t like (a pride of lions, perhaps, or a gathering of waiting crocodiles in the water? who knows?). And it was fascinating to see the line – before the animals began to bunch up again – keep moving. Every once in a while one of the animals a little farther back would pick up speed and go to the front, perhaps temporarily taking the lead. We don’t know, but what we did know was that the line was coming to a stop. As the other animals gathered around and began to form themselves into a huge bunch, it became clear that we would not see a crossing here. 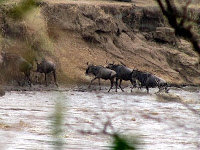 So Charles – good with his instincts – suggested we head off to the Serena crossing (so named because of a lodge located there by that name). As we drove along – it was about a 10 kilometer drive – we came upon another tour guide and asked if there was any action there, any crossing. He told us he had heard that the animals were lining up, so off we went.

We got to the Serena crossing just in time, and we got to see the animals begin their crossing. It was truly exciting, for there didn’t seem to be any predators around, and we could see the wildebeests climbing out and making their way up the other side, to the rich grass that would sustain them well for two or three more months. It was an amazing experience and it, sadly, ended abruptly as two vans came into the area and, without knowing better, I suppose (I’m trying to be charitable) drove up to the herds waiting to cross. Of course they broke up and scattered in every direction, ending the crossing at that spot for the day.