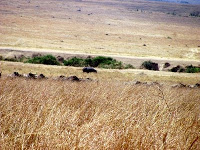 Often referred to as “the most characteristic” of Africa’s water animals, the lumbering hippopotamus is truly a wonder to see. Because they tend to stay mostly submerged most of the time (thanks to having their ears, eyes, and nostrils high up on their head) and do their grazing at night, we kind of forget just how many of these big guys there are around.

On our migration safari, The Four Best Friends were lucky to see hippos twice. On our first attempt at observing a crossing over the Mara River – the one when the wildebeests and zebras were not cooperating and took a couple of hours to decide not to cross – we were lucky to see, from our distant vantage point, a single lone fellow far away across the terrain. That was kind of unusual we thought, but our guide explained that the hippo is often found along, wandering off from his or her pod just to graze and then catching up with the rest of the gang (which can be up to 30 hippos) as dusk begins to fall.

In any case, we didn’t see any others, but it was good to see him at the distance, beyond a line of wildebeests still debating whether to cross or not. The zoom shot at Migration Safari – Hippos isn’t very clear, but I was trying to get some sense of the size of these enormous herbivores: up to six feet (150 cm) at the shoulder, and weighing in at nearly 4,500 pounds (2,000 kg). But we have to not give in to temptation and think their size keeps them from moving; I’ve seen it written that the common hippopotamus can attain speeds of up to 20 mph (32 kmph) and because it heads straight to the water when when it is disturbed, human beings are warned to stay far out of its way, as the hurrying hippo will cut down anything in its way as it moves to the water. 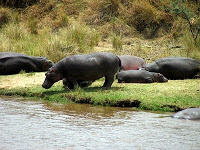 As it turns out, Geoffrey had better luck with his later photos of the hippos in the river, and his pictures really give a sense of the size of these animals. We came upon this small pod – resting in the sun – a little later in the day and even from this distance, we could hear the distinctive grunting sound the animals make. In the water or out, they let you know they are about, and if you happen to be staying in a lodge or campsite near the water when you’re on safari, you hear the sound all day long and, especially, all night long. One of the expected sounds of the forest, and you get used to it (and by the way, if I have not mentioned it before, the Kenyans seem to all use the word “forest” instead of “jungle,” reserving the latter for the rainforest-type setting).