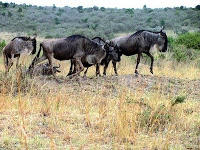 The Best Four came on safari to see the Great Migration and we certainly were not disappointed. We’ll get to the numbers later, as we try to describe our adventures with finding the animals crossing the Mara River to continue their migration on up into the Kenya grasslands.

For the present, let’s share some of what we saw on our first game drive. In addition to the elephant excitement of our afternoon, we saw much more, and addicted safari-goers that we are, we just couldn’t get enough.

As noted in other posts, the migration is generally associated with the wildebeests (in some countries the Afrikaner pronunciation is used – vil’-de-beest – with the accent on the first syllable) and the zebras (sometimes – pretty often, as a matter of fact – referred to as zeh-bras instead of our American zee-bras), and here at Migration Safari – Wildebeests and Zebras are some photos of the first herds we saw. Often the African buffalo gets mingled in, but I think that’s just because they were already onsite and were enjoying the juicy grass before the wildebeests and the zebras migrated from the Serengeti to join them. Some authorities make a big deal about other travelling companions, such as the Thomson’s gazelle, Grant’s gazelle, topi, Coke’s hartebeest, and eland, but it’s the wildebeest that makes up the numbers, along with the many beautiful zebra that join them for the journey.

Also known as the blue wildebeest (I suppose because of its grey-brown coat), this member of the antelope family is a funny looking animal. The long, spindly legs give it an odd shape and seem hardly capable of supporting the wildebeest’s upper frame. On the other hand, it’s not a heavy animal, and I’m always surprised to see how thin the animals’ upper body is, how slightly built the animal is. Another distinctive feature is the shaggy beard, which makes for some silly remarks from time to time amongst safari-goers. Known as a very gregarious animal, it’s not surprising that the wildebeest herds travel together in the migration as they head for better feeding grounds. But that characteristic gets shoved aside a little as the migration moves forward. For some reason, as the animals go toward their new grazing grounds, the wildebeest move “into formation,” positioning themselves into a single file, a line of moving animal bodies that can go on for the longest time (reminding me of my childhood in Virginia, watching the long freight trains moving forward, sometimes with a couple of hundred boxcars). My friends and I didn’t try to count the wildebeest, but it was clear that any one line could have several hundred of them, only herding together and bunching up when there was some impediment to moving on. Very curious. 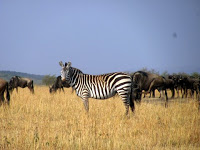 We have two types of zebras in Africa, and from what I can tell from my photographs, what we’re seeing are the ones known as the Plains Zebra (sometimes called Burchell’s Zebra), since their striping goes right around under the belly. the Plains Zebras are all over the place, from Ethiopia to South Africa.

The other species, Grevy’s Zebra, has a different look, with narrower striping that stops when it gets to the animal’s belly, leaving a broad white expanse under the zebra. Sadly, the Grevy’s Zebra is now found almost exclusively in Northern Kenya, and their numbers are diminishing, down to between 1,000 and 2,000 animals according to one count.

The fact most people remember about zebras – aside from their simple equine beauty – is that each stripe is as distinctive as a human fingerprint. I’m impressed about how they always seem to show up with other animal groups, and from our earliest safaris our group has been surprised to see zebras in or near the herds of elephants, giraffes, and other groups we run across. They seem to be very affectionate animals, and it is not at all unusual to see them nuzzling each other as they go about their grazing.

Enjoying the zebras as much as I am, I think I shall re-focus a little as I continue to build my knick-knacks collection at my flat in New York. Although I’m not a rider, for years I have admired the shape of the horse and I have a tiny collection of sweet horse statuettes I’ve gathered during my travels (or that people have given to me). Doesn’t the collection need some zebras now? I thought I had completed my African souvenir shopping a long time ago, but these beautiful zebras might inspire me to head back into the shops.