The Best Four (Charles, Nerisa, Geoffrey, and Guy) took off for Masai Mara to see the migration, and we were hardly out of the campsite and into the game reserve before we were amazed at the numbers of wildebeests, zebras, and other migrating animals that had made their way to this magnificent grassland. We were immediately excited and expected to spend quite some time driving around looking at all the animals that had come looking for food (and yes, probably more than those two-and-a-half million talked about by the experts), but we had an immediate distraction. And our first adventure.

When my pal Tom Rink read my first post about the up-coming safari to see the migration, he had written: “I think this would be awesome to witness, but don’t get too close!”

So guess what we did on our first afternoon. We got too close! 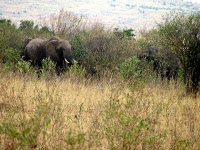 Okay. Perhaps we are a little over-awed about elephants, and I’m happy to admit that of all the animals I see, it’s the elephants that sort of win my heart. So even though we weren’t particularly looking for elephants as we moved into Masai Mara in the mid-afternoon, Mr. Charles – elephant-spotter extraordinaire that he is – had hardly driven twenty minutes before he suddenly turned off the road, off the tracks, and was moving slowly and carefully down toward a gully and up the other side. He admonished us to be quiet and as we drove across the grass (now very short – unlike the visit last May, when it was shoulder-high, the grass now having been “mowed” by the many wildebeests and others who had come north looking for it), it was obvious we were heading for something special.

Charles got us back on another track and we moved – still as quietly as we could move – up the hill to what he had spotted: we saw – we thought – a single elephant munching away at some green branches in the bush.

So we drove a little closer, turned off the engine to watch a while, and we were surprised to discover that it was not just one big bull elephant but apparently a group. It had been a trick of the light and the placement of their enormous bodies that had tricked us into thinking it was just one elephant, so not wanting to disturb them, we switched the engine on again and began to move slowly on the track (you can see how close we got in the photo showing the track).

It was then that we realized we had perhaps made a pretty serious mistake. At this point Mr. Elephant began to look up at us, not pleased with our being so near, and as we looked to the right, that big brown blob – which we had assumed was a rock or a big tree or something (we obviously had not paid any attention to it) was in fact a young elephant. We were suddenly not too happy to be there, and as Charles put the vehicle into reverse, we saw that Mr. Elephant wasn’t very happy either, and he was moving in our direction. Those elephants milling about behind him – which we had first thought were just him alone – were, in fact, his family. For all we knew Mrs. Elephant was there as well and who knows how many other young ones – perhaps from other families as well – were there in that herd. We tried to move away gently, and we were really frightened now, for Mr. Elephant was clearly moving in our direction. In fact, he was getting pretty close, but I couldn’t resist one last zoom shot – determined as always (and foolishly I now realize) to try for one memorable picture. 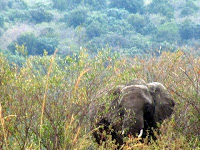 It was memorable all right, and muttering to ourselves about all the stories we had heard about how fast an elephant can move – and remembering that we had (accidentally, to be sure) broken one of the inviolate rules of game by coming too close to a parent’s little one – we got away as fast as we could. We other three kept looking back while Charles drove across the grassland, gradually picking up speed until we got past the ravine and up the other side. Now we could see that Daddy Elephant had turned around and gone back to join his family, so we felt safe, and we all promised not to get too close for the rest of the safari.