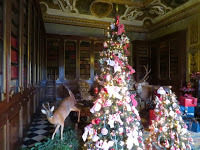 No, don’t panic. I’m not going to try to connect with Mary Martin or Julie Andrews (or the positively hilarious version when Julie herself teamed up with Carol Burnett at Carnegie Hall – that wasn’t just a spoof of the original – it was one of those positively one-in-a-lifetime experiences!).

But, no, that’s not the kind of “favorite things” I’m thinking about. At the moment I’m more caught up in how the holidays put us in the mood for thinking about things that have meant much to us over the years, and how some of them linger in the memory.

Although I’m a big talker and not someone who avoids silence (as a general thing – when I’m studying or concentrating it’s a different story), one of the nicest things about Christmas in New York is the quietness of Christmas Day. I happen to live at one of Manhattan’s busiest intersections, and while we and our neighbors talk a lot about the noise, in reality we’ve all become accustomed to it and we don’t really notice it. And the windows are closed most of the time anyway.

On Christmas Day the city takes on a whole new ambiance. Later in the morning I suppose things will pick up, as people go out to walk along Fifth Avenue to enjoy the splendid window displays in the shops. Or they’ll head out to church.

But it will still be quiet because – for some reason – New Yorkers have decided that Christmas Day is a “quiet” day. Of course there are the “real” reasons for Manhattan’s quietness today: shops are not open, few theaters have performances, even many of the restaurants and coffee shops close, giving employees the day off.

I like to think it’s more than that, though. With the exception of one church in our Murray Hill neighborhood that’s become famous (infamous?) because the rector has – without warning anyone – decided to blast out the church’s electronic chimes 13 times a day instead of the usual twice a day, peace and quiet reign in our city today. [If you’re interested, you can read about that little contretemps here.] I think our Christmas quietness comes about because there’s a sort of civic (not religious – certainly not in New York City!) wish or desire or even responsibility to respect the legacy and long history of Christmas Day in New York as a special day for all citizens, and we just give ourselves a quiet day because, well, it’s something nice to do.

Other favorite things? Here’s one more example: the various “flash mob” singing that’s started to pop up in different places. As anyone who knows me knows, I love classical music and, in particular, choral music (a big part of my life when I was younger). I was delighted last year, early in the Christmas season, when a friend sent me the link to the Hallelujah Chorus being performed to startled lunch-time folks at a huge shopping center. It had been done a couple of years earlier and it was great fun, much appreciated. Of course the video went viral (watch it here). I wish I had been having my lunch in that mall that day! What an experience for those folks!

And there’s more (is this a trend? if it is I love it!). Last October, in honor of the 200th anniversary of Verdi’s birth, members of the WDR Radio Choir Cologne surprised shoppers at a mall with Verdi’s Va Pensiero from “Nabucco” (an all-time favorite of many folks, including me). Maybe it was all part of a larger – I suspect informal – effort, since other such “flash mob” performances took place in other locations.

Perhaps the inspiration (aside from Verdi’s bicentennial) came from Toulouse, where the same chorus had been sung al fresco, very informally, back in 2011 in what appears to be a park back (again, hear it here).

So maybe we’re looking at a new form of participatory entertainment?

Perhaps not totally participatory, since surprise is a good part of the experience as well. And it’s not necessarily classical music. How about classical art? Did you see the flash mob depiction of Rembrandt’s “Night Watch” last April? What a way to announce the re-opening of the Rijksmuseum! And not totally without music, since we had Beethoven’s “Ode to Joy” accompanying the action. Great fun (one version of the video – of several available – is here). Lots of candidates for one’s favorite things.

And these photographs of spectacular Christmas trees? Nothing special. Just beautiful holiday snapshots I wanted to share, photographed at Vaux-le-Vicomte when I visited there last November. More about that later.

Yes, it’s a good time of year to be thinking about favorite things. Merry Christmas.